The Chevrolet Spark is a budget hatchback, with small dimensions that make it suited to life in the city. Although it had smart, modern looks, the Spark is no longer available to buy new in the UK, as a result of a decision to stop selling Chevrolets here. As such, we recommend you take a look at cars such as Kia Picanto, Hyundai i10 and Skoda Citigo.

The Spark was at least cheap to run, thanks to a choice of two frugal petrol engines. But although both were nippy about town, neither were ideally suited to long motorway journeys, where it felt noisy and underpowered. Country roads weren't much fun either due to the Spark’s soft suspension, which meant there was more body lean in the corners than you might expect.

The Spark was a practical five-door car that could just about fit five adults inside. And while it wasn't the best in class, it did provide quite a lot for the money. Even basic models came with air-conditioning.

Despite the fact that Chevrolet has closed its doors to new car buyers, warranties will be upheld and repair work is still possible at authorised service centres, as well as independent garages. These are our thoughts from when it was on sale.

Cheap to run, but economy and emissions fall short of rivals

While the Chevrolet Spark isn't going to win any points for performance, it's very cheap to run. It's available with a choice of two petrol engines – a 1.0-litre or a 1.2-litre. Both return fuel economy of 56.5mpg and CO2 emissions of 118g/km, which means you'll spend just £30 a year on road tax. Despite these low figures, the Spark still isn't as frugal as some of its rivals.

The smaller-engined car is cheaper to buy, but the 1.2-litre petrol makes more sense if you're regularly going to use the motorway thanks to its better acceleration and higher top speed, which makes for more refined cruising.

Both engines feel underpowered on the open road

The Chevrolet Spark can be specced with either a 1.0-litre or a 1.2-litre petrol engine. Neither engine is quick, but with just 68bhp, the smaller one is the slowest, taking 15.3 seconds to get from 0-62mph. The 1.2-litre gets from 0-62mph in a more respectable 12.7 seconds, but it's still not very fast.

The engines' poor pace becomes less of an issue when you drive the Spark, because although its small size makes it ideal for nipping through city streets, its upright body leans quite a lot when cornering on country roads. If you’re looking for fun behind the wheel, the Volkswagen up! and Toyota Aygo are much better bets.

It’s not as composed as some rivals

Although the Chevrolet Spark does have five seats, space is at a premium. Five adults in the car are going to feel pretty cramped – we wouldn't recommend trying that on long journeys. There should be plenty of space for two kids in the back, but the tiny 170-litre boot (a Hyundai i10 has 252 litres) means that you'll struggle to fit much in.

The Spark's soft suspension causes plenty of body lean in the corners, but it's also jittery at low speeds, meaning city driving isn't as comfortable as it could be. The car isn't available with an automatic gearbox, either, so you'll be making plenty of gear changes in town, while the cabin gets quite noisy out on the motorway.

The Chevrolet Spark's practicality is limited by its compact dimensions, but the reality is that many rivals – such as the Hyundai i10 – offer more space inside for passengers. Its tall, thin shape means that elbow room is in particularly short supply and any adults sitting on the rear bench's middle seats are going to feel particularly squeezed. The Hyundai i10 also has a much larger boot, although dropping the split-folding rear seats increases boot space to 568 litres.

All Sparks have five doors, so rear-seat passengers don't need to squeeze behind the fronts to get in. The Spark has a useful number of storage cubbyholes, too, including a decent-sized glovebox and an array of cup-holders.

The Chevrolet Spark didn't feature in our 2013 Driver Power Survey but Chevrolet finished 20th (out of 32) in the manufacturer charts. The Spark comes with a three-year/60,000-mile warranty as standard, but Chevrolet will upgrade that to a five-year/100,000-mile plan at extra cost. The company also offers fixed-rate servicing plans.

The Chevrolet Spark was awarded four stars when it was crash-tested by Euro NCAP in 2009. At the time, it was marked down for not having standard electronic stability control, something that's now fitted across the range.

Even the basic Chevrolet Spark gets equipment such as electric windows and a DAB digital radio with an MP3 player socket, while moving up the range brings equipment such as parking sensors and alloy wheels, as well as power-folding heated door mirrors.

Yet while the Chevrolet is quite cheap and comes with the option of a five-year warranty, it won't hold its value as well as rivals such as the Volkswagen up! or Toyota Aygo.

Show me:
Chevrolet Spark deals: Car deal of the week 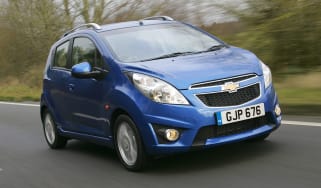