Despite increasingly tough competition from newer rivals, the DS 3 is still a very pleasant and engaging car to drive. While the MINI and Ford Fiesta lead the class when it comes to the ride/handling balance, there’s still a decent compromise here in the DS 3, thanks to its weighty-yet-responsive steering, good grip and well contained body lean. But while the suspension doesn’t disgrace itself, the engine is the highlight.

While the suspension itself is reasonably well resolved, it’s a shame that DS has opted to equip both models with 17-inch wheels as standard. While they fill the wheel arches nicely and look enticing, previous experience leads us to believe the car would have been better served with a 16-inch wheel option. Up until late 2018, 16-inch wheels were available and they offered superior ride quality. 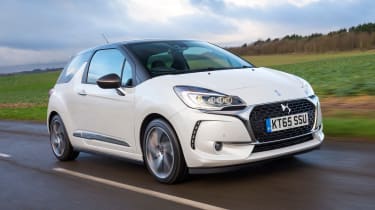 Previously the DS 3 was available with both five and six-speed manual gearboxes but from late 2018 the only transmission is a six-speed automatic. While the gearbox acquits itself well and is a considerable upgrade on DS’s older automatic, there’s no doubt that it has raised the price of the DS 3 and the option of a manual would be welcome.

The PureTech 110 is the only engine option now available in the DS and, despite only being a 1.2-litre three-cylinder, it’s an eager performer with a 0-62mph time of 9.9 seconds and a top speed of 121mph. It’s only offered with a six-speed automatic transmission and it’s a shame there aren't any paddles to let you change gear yourself, as this would make for a better driving experience.