The Fiat 124 Spider is only available with one engine, but it’s powerful enough and suits the car well

Buyers of the standard Fiat 124 Spider only have one engine option (there's also an Abarth version with more power). It's the same turbocharged 1.4-litre petrol currently used in the Alfa Romeo MiTo, so it’s been tried and tested.

The Mazda MX-5 on which the 124 Spider is based is an excellent car to drive, but Fiat’s engineers have tinkered with the 124’s suspension and steering so it has a character all of its own, and is slightly sportier on the road. On longer drives the 124 Spider is a pleasure to drive thanks to its powerful engine and feels comfortable, despite some wind noise from its fabric roof. 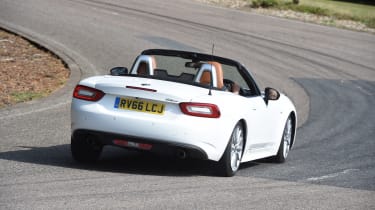 Offering only one engine with the 124 Spider might seem mean of Fiat, but the 138bhp 1.4-litre turbocharged petrol suits the car perfectly and produces plenty of power. While 138bhp doesn’t seem like much these days, the Spider never feels underpowered. Because it makes its power low down in the rev range, the engine doesn’t need to be worked hard to propel the Spider quickly – plus it has sporty exhaust note when revved.

In keeping with these driver-focussed credentials, the 124 Spider is only available with a six-speed manual gearbox, and this is a joy to use. The short gearlever shifts smoothly and accurately from gear to gear, requiring just the right amount of pressure to do so. Thanks to the way the 124 Spider’s engine delivers its power though, you won’t need to change gear that often to keep the car moving at a decent speed.