“The Fiat 124 Spider is a stylish and quick roadster that’s great to drive. It harks back to the golden age of Italian convertibles but adds a dash of modern usability and safety.”

Fiat’s sports cars have something of a chequered past, with a reputation for good looks, compromise and poor reliability all rolled into one. The Fiat Barchetta of the 1990s is a good example; it was an attractive little roadster but was only available in left-hand drive and had a less than impressive reliability record.

The new Fiat 124 Spider was hotly anticipated, however, because on paper it had all the ingredients to be stylish but useable and reliable too. That is largely down to the fact that it is based on the Mazda MX-5, meaning it has the same solid underpinnings. The result is a good-looking car that is both fun to drive and well built.

For many people, the combination of Italian design and Japanese engineering is likely to be very appealing, as the 124 Spider should offer both flair and dependability. 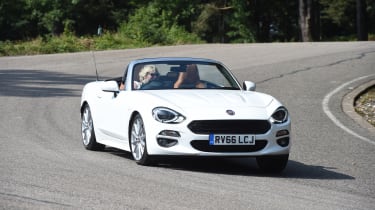 Ironically, the Mazda MX-5 is the Fiat 124 Spider’s most obvious main rival. Although the Lotus Elise is better to drive, it’s also much more expensive and much less comfortable. Similarly, the BMW Z4 is fun to drive and less uncompromising than the Lotus, but it also costs considerably more to buy than the Fiat and is due to be replaced in 2017. Another option to consider is the MINI Convertible; it’s similarly priced and does offer some small rear seats but it’s not as good to drive and is a much more common sight on UK roads.

Despite the performance on offer, the 124 Spider may prove more economical than you expect. The car has a 138bhp 1.4-litre petrol engine that returns official fuel economy of 44.1mpg and CO2 emissions of 148g/km for road tax of £145 per year.

The 124 Spider comes with a folding fabric roof that you have to put up and down manually. This may seem out-dated next to some of the electric soft-tops and metal hard-tops on the market but it’s quick and easy to operate, and more importantly, reduces both the cost and weight of the car.

Although it’s built in Japan, the Fiat 124 Spider has its own distinctive Italian style. The 1.4-litre turbocharged petrol has already been used in the Alfa Romeo MiTo. Its 138bhp is enough to get the 124 Spider from 0-62mph in 7.5 seconds and makes the car feel quick. This strong performance is helped by the car’s low weight and sporty handling.

On the road, the 124 Spider is a joy to drive. It’s small and nimble enough to make manoeuvring around town and parking easy, but get on the open road and the Spider really comes into its own, with sharp handling and a suitably sporty exhaust note when you rev the engine.

Inside, the 124 Spider will be familiar to Mazda MX-5 owners, but that’s not a bad thing: the dashboard is simply yet stylishly laid-out, with soft-touch plastics and easy-to-operate central controls for the heating and air-conditioning. A seven-inch touchscreen sits on top of the dashboard, and this can be controlled using a rotary dial between the seats, so it’s intuitive to use on the move.

While nobody buys a two-door, two-seat convertible for trips to the dump, the 124 Spider has a useable (if not cavernous) 140-litre boot. This has a high load lip, but it’s deep and well shaped and should be enough for a couple of small suitcases or squashy bags for a weekend away. While the Spider lacks a glovebox or door pockets, there’s a useful lockable storage cubby behind the rear seats for added security and storage. The interior also has a number of cup-holders dotted around, as well as a useful storage tray in front of the gearlever, which is the perfect place to put your phone. 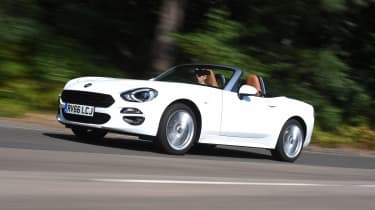 The Fiat 124 Spider is yet to go thorough the Euro NCAP crash safety tests. Reassuringly, the Mazda MX-5 on which it’s based managed a reasonable four out of five stars in its evaluation – performed under the latest and strictest crash regulations. In terms of reliability, the 124 Spider should be a dependable car. While Fiat scored poorly in our 2018 Driver Power customer satisfaction survey, coming 23rd out of 26 brands, Mazda did much better, managing a ninth-place finish.