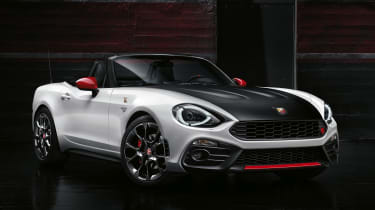 A high-performance, hotter version of the Fiat 124 Spider – the Abarth 124 Spider – will make its UK debut at the Goodwood Festival of Speed, having been unveiled at the Geneva Motor Show. 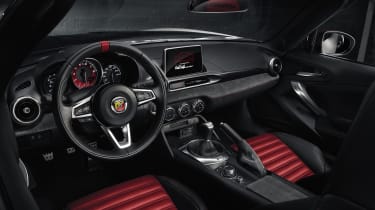 Boasting more power, uprated suspension and a sportier body kit than the standard model, the Abarth 124 Spider will go up against rivals like the Mazda MX-5, Lotus Elise and even the spartan Caterham 7 when it arrives in September, with prices starting at a rather steep £30,000.

Although there’s nothing fundamentally different, design-wise, compared to the Fiat version, you’ll still be able to tell the difference between the two.

There are bigger air intakes in the front bumper to satisfy the increased cooling and breathing requirements of the more powerful engine. There’s also a jutting front splitter and rear boot spoiler to help with aerodynamics, while the side skirts add an extra element of aggressive design to the car – as do the ‘power bulges’ on the bonnet.

All models sit on 17-inch alloy wheels, which, like the windscreen surround and roll bars, are finished in ‘Forgiato Grey’. Abarth versions of the 124 Spider also get LED headlamps and tail-lamps and are available in a choice of five two-tone paint schemes. Naturally, these versions get Abarth, instead of Fiat, badges where appropriate, too.

Again, apart from badging, not much has changed inside compared to the Fiat 124. Leather seats are standard, while you also get an instrument panel with a large, centrally mounted rev counter with the speedometer and other instruments either side of it. 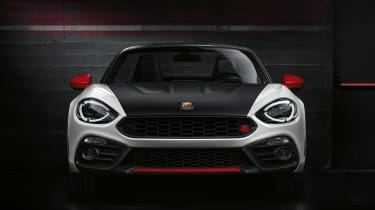 If you want more equipment, DAB digital radio, Bluetooth and USB connectivity, as well as a reversing camera, are all available as options. You can also specify satellite navigation and an infotainment system, controlled from seven-inch touchscreen display. A nine-speaker Bose stereo is also available as an option.

Under the bonnet of the Abarth 124 sits an uprated version of the standard Fiat 124’s turbocharged 1.4-litre four-cylinder petrol engine. Power jumps from 138 to 168bhp and the 0-62mph time is 6.8 seconds – half a second quicker than the fastest Mazda MX-5, on which these cars are based. The Abarth will top out at 143mph and is available with a choice of six-speed manual or automatic gearboxes. 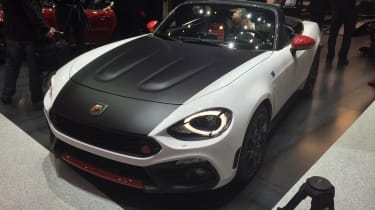 There are no details as yet of the Abarth’s fuel efficiency or CO2 emissions figures, but we don’t expect them to differ too much from the Fiat’s 44.8mpg and 144g/km.

To help deal with the extra performance over the standard model, the Abarth 124 comes with stiffer suspension to help control body lean during hard cornering, while the brakes are larger and more powerful, too.

Weighing in at just 1,060kg, the car should be nicely agile, too, while the limited-slip differential – a device that boosts grip when you’re accelerating out of corners – should help to make the Abarth 124 an exciting drive.

According to our sister title, Auto Express, the Abarth 124 Spider will go on sale in Europe in September, with prices starting at around £30,000.