The Isuzu D-Max has just one engine, which is noisy under acceleration 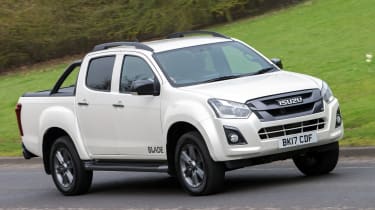 Unsurprisingly, the Isuzu D-Max is a diesel-only affair. While other pickups offer a number of engines, there’s just one in the D-Max – a 163bhp 1.9-litre turbodiesel that provides plenty of punch, thanks in part to relatively short gear ratios. The problem, however, is that the first short gear means you have to rev the engine quite hard before changing up, which makes a lot of noise.

The Isuzu D-Max XTR can get from 0-62mph in 12.7 seconds, which is fairly competitive for a pickup, if some way off the 10.5 seconds the Ford Ranger Raptor takes. 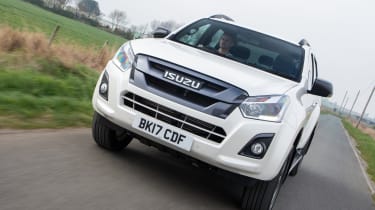 Both automatic and manual gearboxes were new for the facelifted D-Max and both have short ratios, meaning lots of gearchanges are required at low speeds, although the fact the pickup has six gears means it’s reasonably relaxed on the motorway. There’s a low-range gearbox on both the manual and automatic, which improves traction off-road.

Responding to the current trend for pumped up pickups like the Ranger Raptor, the range-topping XTR gets a bold new look. Black bodywork cladding, extended wheelarches and graphics on the bodywork set it apart from other versions, while a 250mm taller ride height sees it towering over most traffic. The body still feels impressively tied down for a pickup but, despite being upgraded for the XTR, the brakes still feel like they can struggle to stop the two-tonne D-Max sharply. The new green-painted suspension and Pirelli off-road tyres certainly deliver in tough conditions, and effective hill descent control is reassuring when teetering on the edge of a slippery slope.