Given it’s such a large car, the Jaguar XJ unsurprisingly does pretty well for interior and boot space. Rear-seat passengers are treated to limousine-like room, even in the short-wheelbase version, enjoying similar comfort to occupants of the BMW 7 Series, Mercedes S-Class and Audi A8. For the full limousine experience, though, the long-wheelbase version of the XJ offers more than 40 inches of total legroom.

The Jag’s boot is a decent size and is capable of swallowing a decent amount of luggage. It’s not a class leader in this area by any stretch, but it should be enough for most. The standard three-seat rear bench folds down, too, but if you go for the optional pair of armchairs instead you lose this function.

Executive cars of this size are almost always going to score big points for interior space, particularly for those fortunate enough to sit in the back. The rear seats are supportive and legroom is plentiful. The long-wheelbase version offers just over 44 inches of legroom – more than some airlines’ business-class seats. Headroom can be a little tight due to the XJ’s low roofline, but Jaguar improved that as best it could in the long-wheelbase version as part of an update in 2014. 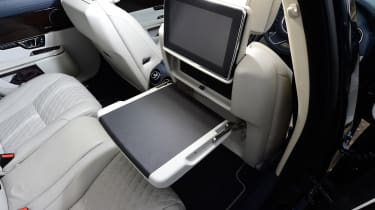 As mentioned above, you can choose to have two individual electrically adjustable rear seats with massage function rather than the standard three-seater rear bench, although you lose the ability to fold down the seats if you go for this.

Storage space inside is very generous, with a large glovebox, cubbyholes in the centre console and door bins that can hold large bottles of water. 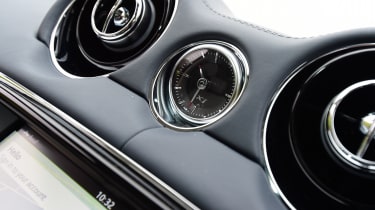 The Jaguar XJ's 479-litre boot isn't as deep as some of its rivals'. Although it's bigger than those of the Audi A8, the Mercedes S-Class' and BMW 7 Series' boots are slightly bigger still. The Jaguar's boot does have a large opening to make it easier to get big or awkwardly shaped items in, though, but there are some awkward intrusions in the boot which is worth noting if you want to carry any larger items.