Not too long ago, Jaguar had a reputation for making unreliable cars with patchy build quality and it seems that the brand still has some way to go in that respect. There's less doubt about safety, though, and the XJ boasts some of the latest crash-avoidance features.

The XJ is a relatively expensive and exclusive car and too few owners participated in our 2019 Driver Power satisfaction survey for it to be individually featured. The brand did well as a whole, though, finishing ahead of BMW, Mercedes and Audi in the overall results – it came 9th out of 30 brands surveyed. The previous year, Jaguar came 10th out of 26 brands.

Owners rate their cars highly for ride, handling, power and comfort. They also like the looks, but reckon fit and finish could be improved. Jaguar infotainment systems could be better, though, and over a quarter of owners reported at least one fault within the first year of ownership – that's more than any other brand in the survey. 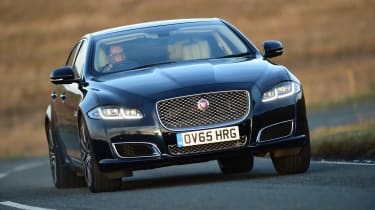 There has been the odd foible with the XJ’s electrics, but the engines have been in Jaguar service for many years now. Some of the mechanical parts were used in the previous-generation model and this generation of the XJ has been on sale since 2009, so Jaguar should have had enough time to sort out any glaring reliability issues by now.

Euro NCAP has never crash-tested the Jaguar XJ, but with safety kit including eight airbags, electronic stability control, traction control and a bonnet that pops up to protect pedestrians in a collision, we'd expect it to score the full five stars.

There's also a laundry list of super hi-tech collision avoidance systems available for the XJ, including all-surface progress control (for making progress on slippery surfaces), traffic-sign recognition, adaptive cruise control (for keeping a safe distance from the car in front), parking assistance and reverse traffic detection (to help with reversing out of a driveway or parking space).