The Kia Carens doesn’t offer a class-leading drive, but it is comfortable

This Kia Carens is much better to drive than the old version. Body lean in corners is still a problem – although it’s an MPV, not a sports car – but soft suspension makes it very comfortable, while wind and engine noise are also kept to a minimum.

The steering, meanwhile, is direct, but doesn’t offer much feedback for confident, fast cornering. It has three settings, so you can have it lighter in town for low-speed manoeuvring and heavier on the motorway for a more stable feel at higher speeds. 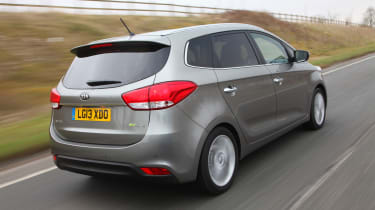 There’s a choice of three engines – one petrol and two versions of a 1.7-litre diesel, producing either 114 or 139bhp. A six-speed manual gearbox is standard, but the 139bhp version of the diesel can be fitted with a seven-speed automatic that costs about £1,500 and hurts both fuel economy and performance

The 1.6-litre GDI petrol, which feels smooth but underpowered, is best avoided – not least because it’s the least economical engine in the range. It’s not even the fastest, either – it gets from 0-62mph in 10.9 seconds, lagging behind the most powerful diesel. Its top speed is 115mph, which isn’t significantly different to the other models in the Carens range. This engine gets Kia’s ISG stop-start system, which at least improves fuel economy a little.

The diesels are the much better option, with the quickest model (the 139bhp) getting from 0-62mph in 10 seconds and both feeling quicker than the petrol Carens. Be aware that fitting the automatic gearbox to this engine makes it slower, with 62mph coming up in 11.6 seconds from rest. The less powerful 114bhp engine does the same in 12.6 seconds. Strangely, stop-start is standard on the diesels, unless you choose the automatic gearbox in trims 2 and 4.