There’s plenty of space for a family in the Kia Niro, plus it has a good-sized boot

Interior space in the Niro is quite impressive. It’s roughly as long as the Kia Cee’d hatchback, but has a decent-sized boot with underfloor storage. This has been made possible by Kia positioning the Niro’s batteries under the rear seats instead of under the boot floor, like in other hybrid cars. 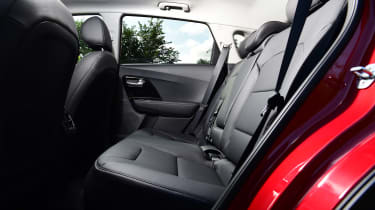 As with most cars, the Niro is generously spacious up front, but there’s also enough space in the back for two adults to sit comfortably without their heads brushing the roof – although the middle seat feels quite narrow and is thus best reserved for kids.

There are also generously sized storage cubbies front and rear, so you won’t be short of somewhere to keep drinks bottles or other odds and ends. Getting into the Niro is easy: although it rides a little higher than the Cee’d hatchback, you don’t have to step up into it like you would an SUV like the Kia Sportage. 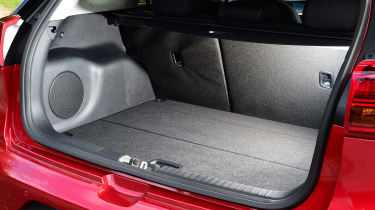 A large tailgate opening and low loading lip mean it’s easy to make the most of the Niro’s 427-litre boot space, which, although generous, is some way off the 502 litres you get in the Prius. Having said that, there's quite a lot of intrusion from the wheelarches, and the car's battery eats into space further. There is a false floor, but the polystyrene tray underneath doesn't provide masses of space for storing larger items out of sight.

You can of course fold down the rear seats to free up more space (for a total of 1,425 litres), but while they drop down easy enough, they can be tricky to push back into place, as they’re quite heavy. Once they’re down, though, there’s a flat boot floor, so you can slide in large heavy objects without difficulty.

A larger battery pack means the Niro PHEV has a smaller boot, reducing its volume to 324 litres behind the rear seats and 1,322 litres with them folded down. The MINI Countryman Cooper S E ALL4 offers 405 litres, while the larger Mitsubishi Outlander PHEV from the class above has 463 litres.

The previous Niro wasn’t deemed suitable for towing, but the facelifted car has a towing pack fitted as standard, which gives it the capability to haul a 1,300kg trailer or caravan. It's a potentially important selling point of the Niro, as many hybrids have a very limited towing capacity (or even none at all), so this could be very good news for some buyers. In the new car, the plug-in hybrid is also fine for towing, but the electric e-Niro isn't.