The Kia Stinger is quick and itshandling is surprisingly accomplished

By delivering a car that’s exciting rather than purely sensible, Kia is hoping to shift the public's perception of the brand. Thankfully, the Stinger delivers on its striking looks, especially in GT-S form.

The Stinger's chassis is fairly traditional, with an engine up front and rear-wheel drive - a recipe BMW and Mercedes fans will be familiar with. A limited-slip differential helps generate grip as you power out of corners, helping the Stinger to feel surprisingly agile for such a big car. An eight-speed automatic gearbox is standard, with paddles behind the steering wheel to allow for manual changes.

The GT-S model is also fitted with adaptive dampers as standard, allowing the driver to adjust how the Stinger feels on the move. In Comfort mode, the ride feels forgiving and although the car feels noticeably firmer in Sport and Sport+, it doesn’t get so brittle that the car is uncomfortable. 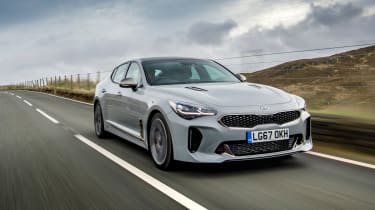 The diesel Stinger isn’t available with adaptive dampers, but the car is still supple enough to deal with broken surfaces nicely, while offering secure handling.

The Stinger GT-S uses a twin-turbo 3.3-litre V6 petrol engine that produces 365bhp and gets the car from 0-60mph in 4.7 seconds. The engine feels smooth and flexible, reacting quickly when you dab the accelerator. The Stinger comes with different driving modes and in Sport and Sport+, the engine sound is enhanced to add a bit more aural excitement. The system works relatively well and isn’t intrusive, but it’s a shame the Stinger’s V6 needs help in this area.

The GT-S is fitted with an eight-speed automatic gearbox, but you can take control of changes yourself if you want to drive enthusiastically. Shifts aren’t quite as smooth as they are in an Audi or BMW when you’re accelerating or braking hard, but there's not much in it. 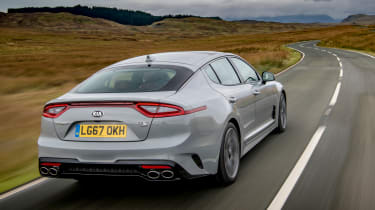 A smaller, 2.0-litre petrol engine is also available in the GT-Line and GT-Line S models of the Stinger. It’s not as powerful as the engine in the GT-S version, but with 244bhp, it still gives the Stinger a good dose of pace. With this engine, the car will get from 0-62mph in 5.8 seconds and on to a top speed of 145mph. Even without the power of the V6, the impressive handling remains intact, thanks to the sharp chassis and precise steering.

The one diesel engine available in the Stinger is a 2.2-litre that produces 197bhp. It takes the car from 0-62mph in 7.3 seconds but offers the best blend of performance and economy, particularly if you intend to use the car on the motorway often.