Designed to be Kia's flagship performance car, the Stinger comes with relatively large and powerful engines, which has implications for running costs. The most economical choice is the 2.2-litre diesel but even this can only manage up to 40.9mpg, with CO2 emissions of 179g/km placing it in the highest Benefit-in-Kind (BiK) band for company-car drivers.

The 2.0-litre petrol model returns up to 30.7mpg and CO2 emissions of 209g/km, while the range-topping 3.3-litre V6 petrol just manages 27mpg with CO2 emissions of 233g/km. That’s quite some way off the Audi S5’s claimed economy of 40.9mpg, and the gap has only increased now Audi has put a potent diesel engine in the latest S5.

Tax is a flat £150 for the Stinger, with the exception of the GT-S, which incurs a surcharge of £325 from years two to six of ownership because it costs more than £40,000. Beware that if you spend enough on optional equipment on the other versions to tip the price over £40k, the same surcharge will apply, bringing your tax bill to £475 a year for the period mentioned. 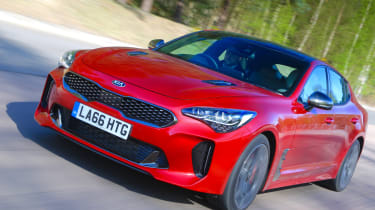 Insurance is another area that contributes to the Stinger having among the highest running costs of any Kia. The entry-level 2.0-litre petrol starts in group 36, which is higher than the equivalent Audi A5's group 33. The flagship 3.3-litre GT-S sits in insurance group 42 out of 50.

One area in which the Stinger gets the better of its rivals, though, is warranty coverage. Kia’s seven-year/100,000-miles of cover is one of the best available, eclipsing the three-year/60,000-mile and three-year/unlimited-mileage warranties offered by Audi and BMW respectively.

Fixed-price servicing is available in the form of Kia’s ‘Care-3’ and ‘Care-3 Plus’ packages, which last for three and five years respectively. Expect the Care-3 pack to cost around £300 and the Care-3 Plus around £600. These schemes are also transferable to the new owner if you sell the car.