The Kia Venga comes with a choice of four engines – two petrols and two diesels – and all have their weaknesses. The Venga isn't much fun to drive, either, with vague steering meaning you have to turn the wheel significantly for anything to happen. Also, the car leans noticeably when going around corners. Every engine takes longer than 10 seconds to get from 0-62mph.

Most of the range gets a six-speed manual gearbox, although the entry-level 1.4-litre petrol only has five speeds. The only Venga with automatic transmission is powered by a version of the 1.6-litre petrol engine without Intelligent Stop & Go (ISG – Kia's fuel-saving engine stop-start system).

The Venga's suspension setup means the ride is a little firm. It'll soak up potholes and bumps fairly well, but it feels fidgety on the motorway and even seems slightly unstable in crosswinds. 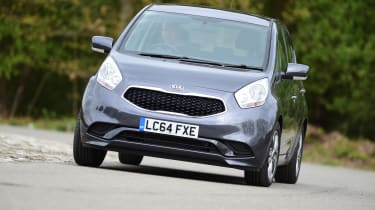 The petrols include an 89bhp 1.4-litre (which comes with ISG) and a 123bhp 1.6-litre engine that's fitted with ISG only when paired with the manual gearbox. This makes the automatic version pretty thirsty for fuel.

The 1.6-litre ISG offers reasonable performance and is the fastest Venga available, getting from 0-62mph in 10.6 seconds. It has the highest top speed in the range too, at 115mph. But the engine suffers from poor fuel economy. Going for the automatic, non-ISG version sees the 0-62mph time increase to 11.4 seconds.

While the smaller 1.4-litre engine is just about powerful enough for day-to-day driving (it gets from 0-62mph in 12.5 seconds), fuel economy is still not particularly good compared to rivals.

The diesel line-up consists of a 1.4-litre CRDi and a 1.6-litre CRDi, both of which come with ISG. Unfortunately, they're also both a little noisy and underpowered. The smaller engine does the 0-62mph sprint in a sluggish 14 seconds, with the 1.6-litre doing it in a marginally more respectable 11.1 seconds.