“The Kia Venga fits into small parking spaces and budgets, but has a tall roof for extra space and comes with a reassuring seven-year warranty”

The Kia Venga only takes up as much room as a supermini on the road, but it’s a surprisingly big car inside, thanks to its raised roofline. It was on sale for longer than most other models in Kia's range, but a makeover in 2015 helped keep it fresh until the end of its production run.

Its size makes the Venga a rival to small MPVs like the Ford B-MAX, Vauxhall Meriva and Citroen C3 Picasso – and buyers are likely to choose it thanks to low running costs and Kia's industry-leading seven-year/100,000-mile warranty. The Venga undercuts its rivals, too, costing almost £2,000 less than a Meriva and £3,500 less than a B-MAX. 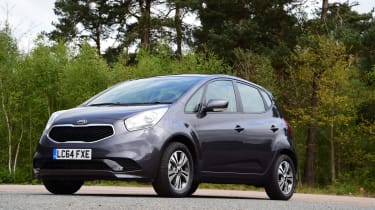 Customers can choose from four engines, with two petrols and two diesels between 1.4 and 1.6 litres in size. The Venga isn’t really a speed machine, because even the larger petrol engine with 123bhp takes 10.6 seconds to get from 0-62mph. The slowest 89bhp diesel takes a steady 14 seconds to cover the same dash.

Venga owners are likely to be a relaxed bunch, though, with more interest in running costs than acceleration figures. Here, the diesels equal each other, posting fuel-efficiency figures of 64.2mpg and identical CO2 emissions of 115g/km. The petrol engines are worth considering if you plan fewer annual miles, with the 1.4-litre returning up to 50.4mpg, just ahead of the 1.6-litre, which manages 47.9mpg. Fitting an automatic gearbox to the 1.6-litre petrol (the only engine it’s available with) has a negative effect, dropping economy to 43.4mpg and increasing emissions to 150g/km of CO2. Every Venga costs £140 a year in road tax.

Space is ultimately the Venga’s biggest selling point. It can easily accommodate four adults and there’s plenty of leg and headroom. You can create more passenger space or boot space depending on your needs thanks to rear seats that can be slid back and forwards. The Venga offers a huge load area with the rear seats folded too. The 2015 facelift improved the quality of the materials used throughout the car’s interior and the car has a reputation for good reliability. 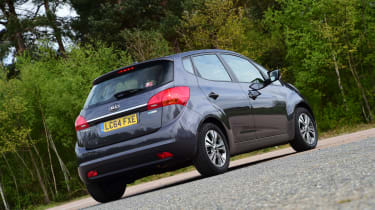 The Venga’s high seating position means visibility is excellent. However, it suffers from body lean in corners, its suspension is a bit on the firm side, plus its steering is very light, with little in the way of feedback, so the car isn’t much fun to drive. On the other hand, it’s well equipped: even the entry-level 1 model features electric front windows, USB ports, MP3 player connectivity and power-folding heated door mirrors, which is impressive for a car at this price point.

There are five other trim levels: 1 Air, SR7, 2, 3, and 4. The 1 Air adds air-conditioning, while the 2 includes alloy wheels, Bluetooth phone connectivity and reversing sensors. You get a seven-inch touchscreen infotainment system and sat nav with 3, while the top-of-the-range 4 comes with a panoramic sunroof, keyless entry and part-leather seats.

Our pick is the Venga 1.6-litre CRDi diesel 3, though, as it’s still an affordable car and offers a good blend of fuel economy and standard equipment. Customers have been impressed with the Kia brand, placing it third out of 27 manufacturers in our 2017 Driver Power owner satisfaction survey.

A full five-star Euro NCAP crash-test rating means the Kia is a safe car. Every version comes with a suite of airbags, hill-start assistance and electronic stability control, too.

Show me:
Today's news from the Geneva Motor Show

Live updates around the clock
New look for 2015 Kia Venga 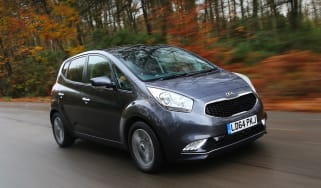 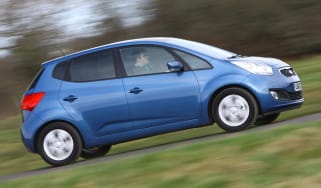 You can now buy a Kia Venga for just £9,995 including a seven-year warranty
Car deal of the week: Kia Venga 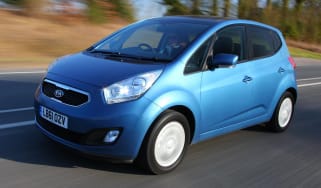 Kia is offering £1,600 off the Venga 1.
Skip to ContentSkip to Footer