“The Ford B-MAX is a small MPV with clever sliding rear doors, providing uninterrupted access to the back seats”

Ford clearly spent lots of time consulting focus groups before designing the Ford B-MAX, because almost all of its features are aimed at making life easier for families, despite its small size. The end result is an MPV that’s tall despite its Fiesta underpinnings, with many of the characteristics of the Ford C-MAX, Ford S-MAX and Ford Galaxy MPVs shoehorned into its small body.

Its number-one feature is sliding rear doors that latch together with the regular hinged front doors, without the presence of a central B-pillar. This was unique when the B-MAX was launched and provides a much wider aperture for getting in and out of the back seats, or tending to a child seat. Being able to open the rear doors fully, even in a tight parking space, is also a big benefit. It’s almost an impressive enough feature to grant the B-MAX class honours all by itself, but the fact it also drives well means the Ford is a stern rival to the Vauxhall Meriva, Honda Jazz, Hyundai ix20 and Kia Venga.

Sharing so much with the previous-generation Fiesta certainly helped in the latter regard, blessing the B-MAX with excellent steering and suspension that’s precise without being too firm. The taller height of the B-MAX means it leans slightly more than a Fiesta in sharp corners, but the B-MAX can still impress along a challenging stretch of road. Its agility is also a bonus in city centres, as are its raised seating position and large windows. 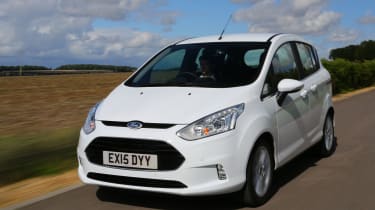 Unless you plan on regular motorway driving, petrol engines are the best option, especially the 1.0-litre EcoBoost. There are 99 and 123bhp versions on offer, with the 0-62mph dash taking 13.2 and 10.9 seconds respectively. Contrary to expectations, the faster version is also more economical, returning up to 57.7mpg thanks mainly to stop-start technology. The 1.4 and 1.6-litre petrol engines are best avoided unless you’re restricted to the 1.6-litre for its automatic gearbox, because neither can crack 50mpg.

If you spend a lot of time on the motorway, the 1.5-litre TDCi diesel is appealing thanks to its 74.3mpg, regardless of whether you opt for the 74 or 94bhp model. Neither is quick, but we’d definitely go for the more powerful option if you can, because 0-62mph in 15.1 seconds is very sluggish. 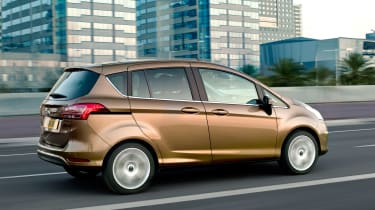 With a tall roofline, the B-MAX positions occupants in fairly upright seating, boosting knee room with plenty of headroom to spare. Lots of storage spaces have been included to help keep things secure and the dashboard feels quite sturdy. The infotainment system and controls are starting to look dated, however, and this will only become more apparent as the new Ford Fiesta filters through. There are lots of buttons, in contrast with newer models, which replace them with a touchscreen.

Offering around 80 litres more volume, the Vauxhall Meriva’s boot is larger, but the B-MAX impresses when you fold the rear seats down, because they sit flatter against the floor. Another neat trick is the front passenger seat, which can flip forwards to allow long items to reach from the tailgate to the dashboard.

The B-MAX came 76th out of 150 models in our 2016 Driver Power owner satisfaction survey, but failed to appear in our latest 2018 results. At least safety needn’t be a concern, with a five-star rating from Euro NCAP following crash-testing in 2012. 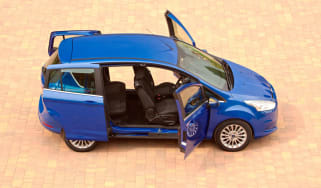 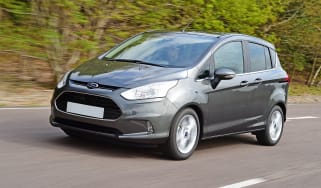 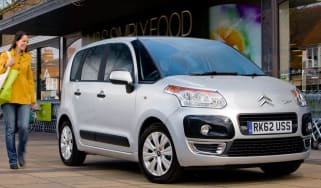 You can save £2,000 off the price of the attractive Citroen C3 Picasso mini MPV
Ford B-MAX review: what’s it like to live with? 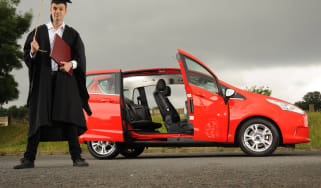 Ford B-MAX review: what’s it like to live with?

The Ford B-MAX is undoubtedly clever, but will it pass our tough examination?
Skip to ContentSkip to Footer