The Ford B-MAX offers decent running costs, with the diesel engines returning fuel economy of around 74mpg. But this comes at a price, with the cheapest diesel model costing roughly £1,500 more than the cheapest petrol.

The B-MAX is expected to retain more of its value than competitors come resale time. After three years, it should return between 42 and 45% of its purchase price – maybe a little less if you go for one of the EcoBoost petrol models. This beats the Vauxhall Meriva by a large margin and is also better than what the Hyundai ix20 and Nissan Note are likely to achieve.

The Ford B-MAX is available with four petrol engines, which are cheaper to buy than the diesels. We think the 1.0-litre EcoBoost is the star of the show, with CO2 emissions of 119g/km for the 99bhp model and 114g/km for the 123bhp version (which has stop-start technology). These engines return 55.4 and 57.7mpg respectively and every B-MAX costs the same £140 in annual road tax. 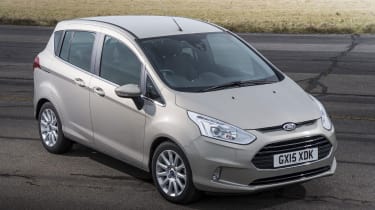 There’s also a less hi-tech 1.4-litre petrol, which produces 89bhp, emits 139g/km of CO2 (for a £130 tax bill) and manages 47.1mpg. A 104bhp 1.6-litre completes the petrol line-up and is the only model fitted with an automatic gearbox. This is by far the most expensive version of the B-MAX to run, with average fuel economy of 44.1mpg and CO2 emissions of 149g/km.

Ford’s EcoBoost petrol engines are more advanced than the 1.4-litre in the Vauxhall Meriva, which emits between 139 and 166g/km of CO2.

For company-car drivers, either the 1.0-litre EcoBoost or 1.4-litre diesel should prove affordable to run, with Benefit-in-Kind (BiK) ratings of 19%.

Insurance for a B-MAX won’t be expensive – the car runs from group eight for the entry-level 1.4-litre model up to group 12 for the 123bhp version of the 1.0-litre EcoBoost.

Ford’s warranty on the B-MAX covers the first three years or 60,000 miles of ownership, whichever comes sooner. This used to be the industry standard, but with manufacturers like Hyundai now offering a five-year/unlimited-mileage warranty, it’s a shame Ford charges £260 to extend it to this length.

A fixed-price servicing plan is available, with two years of maintenance costing £340 and three years £550. This price also includes roadside assistance throughout Europe and up to seven days’ replacement car hire.