The Ford B-MAX has a small boot, but unique side doors and a thoughtful design makes up for it

The Ford B-MAX has a unique party trick: its front and rear doors open away from each other and there’s no central pillar between them. This is said to create an opening 50% larger than what you'll find in the Vauxhall Meriva, making it much easier to hop in and out of the B-MAX.

The back doors slide on runners, so can be opened fully even in a tight parking space. This is especially important for easily and comfortably accessing rear child seats, which can be fitted on the two outer rear seats thanks to their standard ISOFIX mounting points.

You sit fairly upright in the B-MAX, which will appeal to drivers who like feeling higher up, with good visibility of the road ahead. However, long pillars frame the windscreen and there are thick pillars either side of the back window, causing large blind spots. This makes parking sensors a useful addition if you frequently have to negotiate tight car parks. 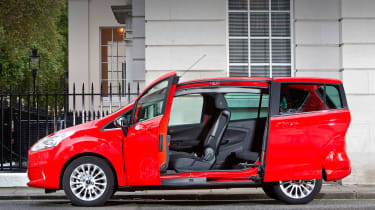 As well as being able to access the Ford B-MAX incredibly easily through those clever doors, a tall roofline means there’s lots of head and legroom. There’s plenty of storage space inside, too. The glovebox and door bins will easily accommodate a large bottle of water and there are two cup-holders located between the front seats.

The boot can hold 318 litres of luggage, which is two more than a Ford Focus but almost 80 short of the Vauxhall Meriva and more than 120 less than the Hyundai ix20. Yet the B-MAX has some neat tricks up its sleeve, such as 60:40 split rear seats that fold flat and a front passenger seat that can fold forwards to allow you to carry items up to 2.35 metres long. 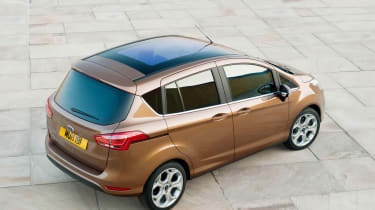 A large hatchback and smooth loading lip make accessing the boot very easy. There’s also an artificial boot floor, which can be moved up to create a flat surface or dropped down for extra space. Sadly, a spare wheel isn’t standard equipment, but a space-saver is a £100 optional extra across the range.