You can save £2,000 off the price of the attractive Citroen C3 Picasso mini MPV 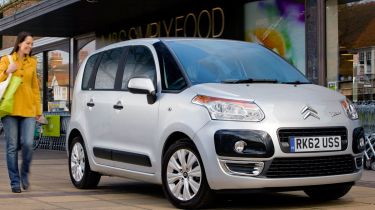 The Citroën C3 Picasso mini MPV can now be had for as little as £10,995 after the company dropped its price by £2,000. It means the Citroen now undercuts newer rivals such as the Ford B-MAX mini-MPV, which costs from £12,995.

While the Citroen may be getting a little long in the tooth – the car's quirky looks do a convincing job of hiding its age. The Citroen offers a large 500-litre boot, which has useful features such as a floating floor, which is ideal for concealing valuables. The rear seats also move forward and backwards for more luggage space, or extra rear legroom. The Citroen's load-lugging capacity compares particularly well to the Ford B-MAX, which can muster just 318 litres of space. However, the Ford does have pillarless, sliding rear doors that give unrivalled access to the back seats.

The basic Citroen does without useful equipment such as air-conditioning (something the entry-level Ford B-MAX also misses out on), but does get kit like electric windows, electric heated door mirrors and an MP3-compatible CD player. The cheapest C3's 1.4-litre engine can manage 44.6mpg and has CO2 emissions that translate into road tax of £125 annually.

While the Citroen is comfortable at moderate speeds, out on the motorway it can get noisy. In corners, it’s also let down by soft suspension, which means the car's body leans in bends that would leave rivals like the B-MAX unfazed. The Citroen also has an uncomfortable driving position – thanks to a cramped footwell and the lack of a footrest next to the clutch pedal.

For full reviews of the entire Citroen range, click to the Carbuyer Citroen reviews page.