The Mazda5 isn’t as cheap to run as it should be and lags behind other models in the brand’s range that are fitted with more up-to-date ‘SKYACTIV’ engines. In fact, the Mazda5 can’t compete with almost all of its rivals in terms of value for money; on everything from fuel economy to insurance costs, it’s far from the cheapest choice.

Neither of the Mazda5’s engines is particularly economical compared to pretty much all of its newer rivals. 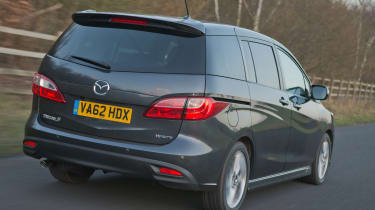 The 5’s diesel engine is a better bet for economy. It’s still not great in the face of the competition, but fuel economy rises to 54.3mpg, while CO2 emissions of 138g/km sees the road tax drop to £130 a year. The 1.6-litre diesel in the Toyota Verso returns up to 63mpg, while the Citroen C4 Picasso is capable of up to 74mpg and escapes road tax due to its very low emissions.

Both the 1.6-litre diesel and 2.0-litre petrol are in the same insurance group: 16. In comparison, the Citroen Grand C4 Picasso insurance ratings can vary widely; the smallest petrol is in group 14, while the top-of-the-range diesel reaches group 25. The Toyota Verso beats the Mazda5 here, with its insurance groupings ranging from 13 to 15.

Mazda offer a three-year fixed-price servicing plan for either an up-front payment of £499 or the same amount spread out into monthly payments.