The E-Class estate was always a great load lugger, and 4x4 makes for a great tow car 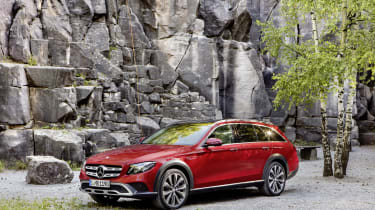 The Mercedes E-Class Estate is renowned for offering practicality that belies its luxurious nature, especially when you notice its considerable 640-litre boot – a volume that handily trumps the Volvo V90. 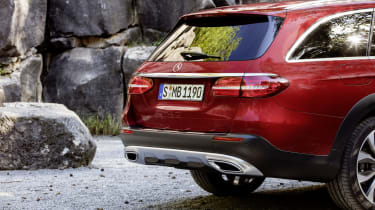 Practicality isn’t only a virtue of the boot. There are storage areas dotted throughout the interior, with a generous glovebox, useful side pockets in the doors and nets in the front seatbacks. There’s also a pair of cupholders and a compartment beneath a sliding panel in the centre console – made possible by the steering-column mounted gear selector.

The boot is the undoubted star of the practicality show, though – if its initial size isn’t enough, you can drop the seatbacks to free up a whopping 1,820 litres of total load area, and if you still need to carry passengers in the rear, you can split the seatback three ways with a 40:20:40. Even with the rear seats up, the load compartment is over a meter long at floor level, and around 90cm at the base of the windscreen, so swallowing bulky loads won't be a problem.

The boot also features a powered tailgate with hands-free operation when you wave your foot under the back bumper. The floor is flat and there’s no noticeable load lip to haul heavy items over. Cargo is kept away from prying eyes by a retractable load cover that deploys automatically when the tailgate is lowered.

The Mercedes E-Class All-Terrain looks like being a capable tow car, too. Assuming it can at least equal the figures for the conventional estate it's based on, the E350d version will be capable of hauling a 2,100kg braked trailer, or up to 750kg unbraked. Furthermore, the provision of four-wheel drive will make pulling away with a laden trailer much easier on low-traction surfaces like grassy campsites.