While many models billed as four-seater convertibles are best described as optimistic where two adult rear passengers are concerned, the E-Class Cabriolet has been designed to seat four in comfort.

You can also head further afield, because the boot is large enough for a holiday a few weeks long instead of a few days, and the rear seats even split and fold to increase space when you don’t have passengers in the back. 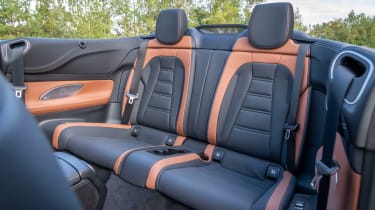 Next to the old E-Class Cabriolet, the new model is 123mm longer, 74mm wider and 30mm, so it’s no wonder practicality has been given a serious overhaul. The Audi A5 Cabriolet is around 15cm shorter, so it’s no surprise back-seat passengers will be more comfortable in the Merc for long trips. Their most likely complaint is that the seatbacks are a little upright.

Passengers sat in the front will enjoy lots of legroom and headroom, while the extra width allows for a broad centre console and padded armrests. Once the roof is down, the airflow over the interior is smooth even at higher speeds, particularly with the frameless side windows up and the optional Aircap extended.

Should the weather change suddenly – a certainty in the UK – you can put the roof up or down at speeds of up to 31mph in around 20 seconds, which is fairly quick for such an expansive canvas roof. 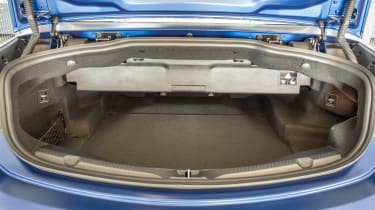 With the roof up the boot measures 385 litres, virtually matching the Audi while offering a substantial 85 litres more than the BMW 6 Series Cabriolet. The Mercedes has another party trick, too: its split-folding rear seats make it possible to carry awkward items like snowboards and golf clubs lengthways with room to spare at either side.

Do note that with the roof down the boot shrinks rather noticeably, though. When the roof is up, its storage area can be electronically lifted at the touch of a button on the bootlid’s inside edge. Obviously you can’t move this out of the way then the roof is stowed, reducing the usefulness of the boot both in terms of outright size as well as shape.

While it’s fair to say other convertibles have a similar setup, if you’re planning a road trip in the Cabriolet you may need to pack squashy bags rather than rigid suitcases; luggage that fits in to its boot with the roof up may not when it’s down.