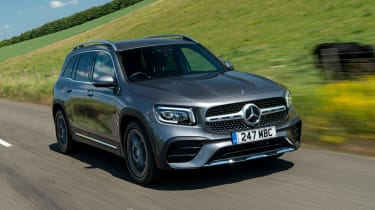 Engineers had a wide selection of engines to put in Mercedes' eighth SUV, but for now at least they've kept things pretty sensible and family-focused, offering a turbocharged 1.3-litre petrol and 2.0-litre diesel to UK buyers. This helps set it apart from the similarly-sized Mercedes GLC, which is available with bigger, six-cylinder engines and plush air suspension.

The GLB does enjoy a smooth automatic gearbox (there's no manual option), that's keen to shift up quickly to keep progress quiet and unruffled. Sport mode allows the revs to climb higher but, in the diesels at least, this doesn't feel as natural. 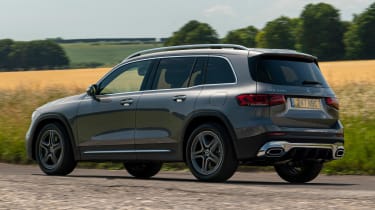 Despite conventional steel springs and dampers as opposed to more luxurious air suspension, the setup on the GLB does a good job of soaking up bumps, but a fair about of body lean in corners only adds to the more relaxed driving style. Even given this comfort-orientated brief, we'd like some more feedback through the light steering, but at least the lack of weight makes the GLB easy to drive.

Despite a consumer-driven shift towards petrol in recent months, Mercedes thinks diesel will still be more popular in its SUV range for the time being. To this end it offers the GLB 200d and 220d, both with the same 2.0-litre diesel, but tuned differently to produce 148bhp and 187bhp respectively. This is a familiar engine that's fitted in bigger models than the GLB, so here it feels plenty quick enough. 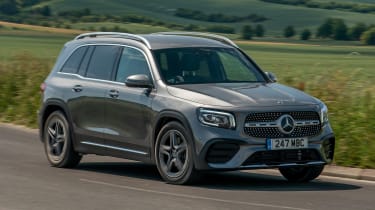 In range-topping form, the GLB comes with 4MATIC four-wheel drive as standard (it's optional for the GLB 200d), and gets from 0-62mph in 7.6 seconds. That's almost two seconds faster than the Discovery Sport D180 and is competitive with the D240. It's a pretty refined engine too, only making itself known at higher revs.