"The Mercedes Viano is essentially a van with more seats, so there's loads of interior space." 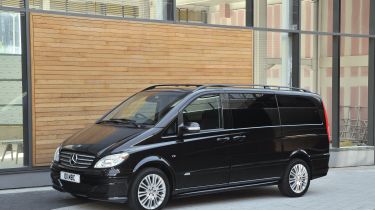 The Mercedes-Benz Viano rapidly became a popular choice for anybody needing to regularly carry groups of six or more adults for long distances in considerable comfort. With its origins in the Vito commercial vehicle, very few rivals offered as much space or as much durability.

With three body sizes available, Compact, Long or Extra Long, the Mercedes Viano is able to carry up to eight people, including the driver, though other seating combinations are available, and some vehicles have been internally modified to carry fewer people but in private-jet levels of comfort and luxury.

All models have air-conditioning, electric front windows, second-row vent windows and tinted glass as well as remote-control central-locking. The entry-level Trend is geared far more towards practicality than luxury, the Ambient adds additional luxury features such as a 12-volt refrigerator and full leather trim, while brightening up the exterior with alloy wheels and attractive trim features.

It’s worth noting that passenger versions of the Mercedes Vito van were also available and are cheaper than the Viano, but specification can vary dramatically from the Viano.

The Viano Ambient also has rear air-suspension with a self-levelling feature, helping to add a bit of extra ride quality and further disguising the Viano’s van origins. These originas make it a very practical vehicle though, with the seats all mounting on longitudinal rails which allow for numerous interior configurations. Four individual rear seats are supplied from the factory, each with integral head restraints, seat-belts and seatbacks which can fold flat to form a table. These can be installed in a face-to-face layout if so desired, and have a quick-release facility to ease removal.

Additional seats were available as an option, as was a rear bench in place of the two individual rearmost seats, and a two-seat settee could be chosen too. Common interior layouts are 2+2+2, 2+2+3 and 2+3+3, though aftermarket specialists have produced myriad further permutations.

Three diesel engines are available. There is a 2.0-litre or 2.2-litre with 116 or 150bhp respectively, both of which can have a six-speed manual or five-speed automatic gearbox. The smallest is a little low on power and drivers may find the 17.6 second 0-62mph time unacceptable for day-to-day driving, although it may not be an issue if the car is mainly used around town.

The 2.2-litre is rather better, the automatic version of which brings that time down to 13.0 seconds. However, the 3.0-litre diesel with 204bhp is genuinely fast, with a 9.7 second 0-62mph time. It’s far more smooth and a lot quieter, too. The 3.0-litre diesel was only sold in the UK as an automatic.

Best for quietness and performance, though by far worst for economy, is the rarely-chosen 3.5-litre V6 petrol engine which makes the Viano surprisingly sporty to drive, while passing very little noise or vibration into the passenger compartment. It struggles to beat 23.7mpg, though, compared to 30.7 from the 3.0-litre diesel and 32.8mpg from the most economical 2.2-litre diesel.

Servicing and maintenance is largely the same as with Mercedes cars, with a service being due every year or 15,000 miles. Mercedes Passenger Car and Commercial Vehicles are very separate entities in the UK, so the Viano can only be serviced or repaired by official Mercedes Passenger Car workshops, while the Mercedes Vito has to be referred to a Mercedes Commercial Vehicles workshop for servicing.

Thanks to its lack of rivals, the Viano continues to have a strong following and demand for good used examples is strong. Many find themselves in use by executive hire companies or performing VIP duties for companies, though they also have strong appeal as a spacious, comfortable long-distance family transport.

The Viano has now been replaced in the Mercedes range by the V-Class. You can read our full review here

Buyers looking for the most fuel efficient version of the Viano should go for the 134bhp 2.0 diesel engine as it is capable of 38.7mpg and produces 192g/km of CO2 which means it'll cost £245 per year to tax- all models fall into the same tax group however. The optional automatic gearbox does little to dent the running costs and is actually slightly faster.

Difficult to park - it's a huge van, after all

The driving position in the Viano is excllent for a van-based MPV offering loads of room, even for drivers well over 6ft tall. Best suited to long journeys on motorways the Viano makes perfect sense for taxi firms offering airport connections or large families planning long road trips on the continent. Because the Viano is so large parking is very tricky and on twisty, bumpy roads the ride does suffer, it remains predictable though. We'd choose the 2.2 CDI Ambiente model as it is well priced against the competition and includes the added luxury of leather seats and the smooth automatic gearbox.

Top-spec models can carry up to seven passengers in comfort

Available in three body sizes, the two long wheelbase versions offer massses of passenger legroom, whilst headroom is plentiful in all models. The extra long versions simply add increased levels of boot space to long wheelbase versions. The standard model is adequate for most owners however. The seats are all comfortable and the the cabin is well protected from road noise, despite its commercial origins. Limited edition Avantagarde 125 models take interior comfort to luxury car levels - but it's really pricey.

The twin-sliding doors make getting in and out of the Viano very easy, they are also very useful in tight car parking spaces. The standard seating layout consists of two front seats and two sliding three-seater rear benches, offering seating for seven passenegers and a driver. Optional arm-chair seats are available as an option replacing either row of benches, they can also be fitted in reverse, facing one-another, to create a mobile meeting room. The arm-chairs fold flat to create tables or can be removed altogether to create a huge loading bay- storing them is tricky however and they are very heavy. The large door pockets and glovebox are handy for storing loose items and the roof-hinged tailgate provides a useful shelter from the elements when loading and unloading luggage.

Crash tested in 2008 by Euro NCAP the Viano scored four stars for adult safety and three for children. The mechanical build quality of the Viano is very high as it shares a platform with Mercedes' highly dependable commercial van, the Vito. Some of the cabin materials feel much cheaper than the ones found in Mercedes cars however, although it is most noticeable in lower spec Trend models. Several recalls early in the model's life should now be completely ironed-out.

Cheaper than its VW rival, but still expensive 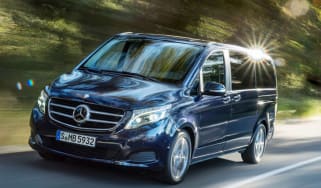