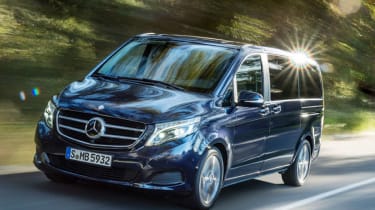 The new Mercedes V-Class MPV was unveiled in Germany today and is set to offer improved comfort, versatility, efficiency, and better safety over the Mercedes Viano it will replace next year. Mercedes is also keen to move the V-Class away from the Viano’s ‘van with seats’ image.

While the van-like profile of the Viano remains, the Merc V-Class gets a new front end and headlights that look similar to those found on the new Mercedes E-Class, with bright-shining LEDs incorporated into their design. The sides of the V-Class have a bold line, which also mirrors other models from the Mercedes range.

Arguably the biggest change can be found inside, where the V-Class gets a dashboard that wouldn’t look out of place in a Mercedes E-Class saloon. It features a large central screen that is navigated using a touchpad system. It features in other models from the Mercedes range, and operates in a similar way to a smartphone’s touchscreen.

The upmarket interior can be fitted with a maximum of eight seats, although buyers get to choose from a variety of options, including four luxurious individual chairs that face each other, or two forward-facing, three-seat benches that have room for six full-sized adults. The rear window can also be opened independently of the back door, for loading small items. The V-Class will be offered in short and long-wheelbase forms – the latter giving extra space for luggage.

The V-Class is equipped with new kit such as Crosswind Assist – to keep the high-sided MPV stable in gusty conditions, and Attention Assist, which warns the driver if they need a rest. Optional extras include a 360-degree camera, parking assist, and Mercedes’ seven-speed automatic gearbox. All models get adaptive dampers to make the V-Class more comfortable on varying road surfaces.

In the UK, the Mercedes will be offered in V220 CDI and V250 BlueTEC trim levels. The 250 BlueTEC is a replacement for the old 3.0-litre engine and produces an identical 187bhp, but emits up to 28 per cent less CO2.

As with other Mercedes models, the V-Class is likely to be launched with an optional 'Edition 1' package. On the V-Class this would include sports suspension, upgraded upholstery, tinted rear windows, a premium climate control system, a surround sound hi-fi and additional driver aids. The V-Class is set to go on sale in March 2015 and will be priced from around £35,000, with the Edition 1 version commanding slightly more thanks to the additional equipment.

For all our reviews on the current Mercedes range, visit the Carbuyer Mercedes reviews page.