“The MINI Paceman is an intriguing proposition. It offers decent rear space and powerful engines, but without the practicality of five doors or the driving appeal of the hatch.”

The MINI Paceman is an unusual cross between a three-door hatchback, a coupe and an SUV. It has the raised ride-height and optional four-wheel drive of an SUV, the sloping roofline of a coupe and the three doors of a small family hatchback.

While there’s a decent amount of space in the back and in the boot, access is limited due to the lack of rear doors and there’s strictly only room for two back there. The rest of the car will be familiar to those who know MINIs, with similar styling to the hatchback and the MINI Countryman.

You have the same choice of engines as you get across the rest of the MINI range, with the exception of basic One and One D versions. There are Cooper, Cooper D, Cooper S, Cooper SD and John Cooper Works models – all of which are quick and economical to varying degrees. The best balance between the two is struck by the Cooper SD, which offers 143bhp, 62.8mpg economy and CO2 emissions of just 119g/km. This means it’ll only cost £30 a year to tax.

Cheap to run if you choose one of the economical diesels

Choosing a petrol model brings an inevitable drop in fuel consumption, but the Cooper’s economy of 48mpg and emissions of 137g/km should break the bank. It pays road tax of £130 every year.

Fitting your Paceman with four-wheel drive will reduce fuel economy by around 5mpg and CO2 emissions increase.

MINI offers service plans that mean you can save money on multiple services, while insurance ranges from group 15 in the Cooper D to group 33 in the John Cooper Works.

The Paceman’s unique selling point is combining the interior space of the Countryman with the better “go-kart” handling and performance of the regular MINI hatchback.

Sadly, that does mean that it is very much a halfway house, with the drive decidedly falling between stalls.The Paceman has a longer, more-stable wheelbase, which means its rider is better than the standard MINI, but while it’s lower than the Countryman, it is still quite high off the ground, heavier and longer than the hatchback. So, handling suffers compared to the hatchback but is better than Countryman. It’s still fun to drive, with responsive petrol engines and reasonably refined diesels, and if you use the optional Sport mode, it does get sportier. The diesel automatic models are the least engaging for driving enthusiasts but they are cheaper to run than the petrols.

If performance is top of your list, then the MINI Paceman John Cooper Works is the only choice in the range, going from 0-62mph in 6.9 seconds. Likewise, if maximum practicality is what you’re looking for, the ALL4 four-wheel-drive models cope best in a variety of conditions.

The Paceman’s raised suspension soaks up bumps and makes it more comfortable than the standard MINI. For 2014 MINI has also added more sound deadening, but there is still more noise transmitted into the interior than there should, even if redesigned wing mirrors have lowered wind noise.

The Paceman’s interior closely mirrors the retro-style looks of the standard MINI, with toggle switches and an oversized dial in the centre of the dashboard. MINI has updated the car for 2014 with flashes of chrome and new plastics, but the car doesn’t feel as well put together as the new MINI and it doesn’t feel like the upmarket product it once did.

Getting comfortable behind the wheel should be simple enough thanks to a wide range of adjustments for the driver’s seat and steering wheel. To some, the biggest advantage of the Paceman over the normal MINI is its raised ride height, which gives and better view of the road.

Much more practical than the standard MINI hatchback

Behind its brother, the Countryman, the Paceman is the second most practical MINI available on the market. You get a total 1,080 litres of space with the seats fold flat, which is only 90 litres less than the Countryman and still a lot more than the regular MINI hatchback, which only offers a maximum of 680 litres of space. The boot opens in an upwards direction to make the load area even larger, but the rear lights do stick out a bit, making the opening a bit smaller than it could be.

There's also the fact that the Paceman only has three doors, which really does compromise rear-seat access for bulky large objects. On top of this, there are only two seats in the back, so you can only carry a maximum of four people anyway.

Well-proven components with the engines used in many different models

It may look like an entirely new MINI, but the Paceman is constructed with the same platform used by the MINI Countryman, in Arnold Schwarzenegger’s hometown of Graz, Austria. The engine, gearboxes and all-wheel-drive systems have all been tried and tested across the rest of the MINI range.

The 1.6-litre petrol engine and six-speed manual gearbox is also used in Peugeot and Citroen models, so it's been in production for quite some time and has performed well, with no major problems reported. What's more, the fact that BMW owns MINI means that build quality and reliability are high.

However, MINI only placed 28th in the manufacturers list in the 2013 Driver Power customer satisfaction survey, with no individual models cracking the top 100 cars. The Paceman is likely too new to feature, but the Countryman placed 125th in the poll. None of this means the Paceman is unreliable, just that there’s room for improvement, especially for a premium brand. In terms of safety, front, side and curtain airbags and dynamic stability control are fitted as standard, while park distance control and adaptive headlights are available as optional extras.

As desirable as the Paceman may be, it is also the most expensive MINI in the brand's range, so it’s probably more likely to be an emotional purchase rather than a rational buy. But not all will be lost if your follow your heart and get a Paceman, as MINIs have strong resale value in the used car market, bolstered heavily by the strength of the brand.

MINI is careful to limit the number of cars that it builds, so that even in slow sales periods it doesn’t flood the market with cars and it always retains its desirability. The other strength of the Paceman is that it's around half the price of the rival Range Rover Evoque, its only obvious main competitor. 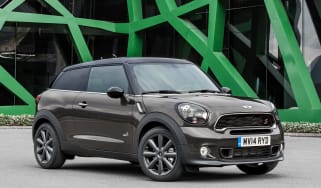