Prices for the new MINI will start at £13,750 when it goes on sale later this year 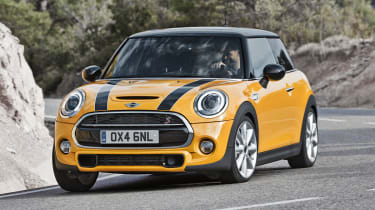 The new MINI may be an all-new car, but it looks incredibly similar to the model it replaces. Changes include rounder headlights, LED daytime running lights, and larger rear lights that look similar to the ones fitted to the MINI Countryman SUV.

While the new model is still called the MINI, it is actually quite a bit larger – it’s wider, longer and taller than the car it replaces. That means that space has increased inside and the front seats now have a wider range of adjustment, while the boot – which was annoyingly small in the old car – is 30 per cent bigger, at 211 litres.

Although the car will not reach showrooms until later in the spring, we can expect MINI Cooper and MINI Cooper S models to be delivered to their new owners by the middle of summer.

Prices and specs for the new MINI

As before, the MINI will be highly customisable with items ranging from contrasting white or black painted roofs (no-cost options), to coloured wing mirrors, and a rear spoiler. The new model will also be available with five new colours.

The new MINI Cooper S now costs about £1,000 more than the old model, but is both faster and more economical. The range will be topped later in the year by the even faster MINI Cooper John Cooper Works.

The interior matches the exterior, in as much as this is still very obviously a MINI. As before, the most prominent feature is the centrally-mounted oversized dial, which now houses the car’s infotainment system, which relays everything from the stereo controls to the parking sensors. It also features colour LEDs that act as a visual aid to some of the controls – such as the sat-nav. Owners can also set the car up in three different modes – Sport, Mid, or Green – that alter the setup of the car, for sporty or economical driving. New owners can also opt for an 8.8-inch screen, with sat-nav, the price of which has yet to be revealed.

The MINI will come with a choice of extremely frugal petrol and diesel engines. The new MINI One can be had with either a 1.2-litre petrol – that can manage 61.4mpg, emissions of 108g/km, and 0-60mph in 9.9 seconds – or a 1.5-litre diesel. The diesel is even more economical, with 83.1mpg possible and emissions of 89g/km, for free annual road tax.

Find out more about all the models in the current MINI range, by visiting the Carbuyer MINI reviews page.