A new version of the Hyundai ix35, powered by hydrogen, is to be trialled in London 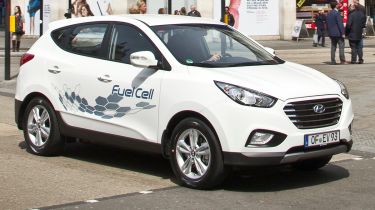 A new Hyundai ix35, powered by a hydrogen fuel cell, is set to arrive in the UK as part of a project to establish new infrastructure for environmentally friendly fuel.

This new Hyundai ix35 Fuel Cell SUV comes as part of the London Hydrogen Network Expansion (LNHE) project, which aims to make hydrogen more accessible as a fuel to facilitate future vehicles, instead of petrol or diesel. Hyundai says that this new SUV is the world’s first hydrogen fuel-cell car, and five will be leased to drivers in London.

The company plans to build 1,000 of these energy efficient cars between now and 2015, with the majority being sent to Europe where there are a number of schemes to kick-start the new zero-carbon fuel.

This new Hyundai ix35 has been designed to be as practical, safe and as good to drive as the normal ix35, so it goes from 0-62mph in 12.5 seconds (compared to 12.4 in the diesel version) and has a long range of 369 miles on a single tank of fuel.

Hydrogen fuel cell vehicles like this are filled up at a hydrogen filling station, which is then used to generate electricity for an electric motor that drives the wheels. That means there are no emissions at all, and it only takes about three minutes to fill up from empty.

Two of these stations already exist in London, with one open to the public at the moment, and a third on its way. There are plans for three more by 2015, when the LNHE project hopes to have more fuel cell vehicles on the roads including public transport like buses or scooters.

A spokesman for the LNHE project said that electric vehicles as we know them now are temporary, and that the convenience of fuel cell vehicles will mean they are more likely to replace petrol and diesel in the cars of the future.