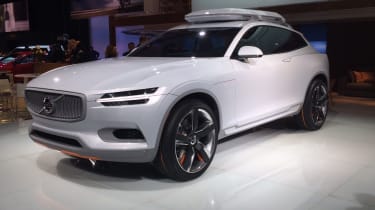 The new Volvo Concept XC Coupe has been revealed at the Detroit Motor Show, and although Volvo does not plan to put into production, it gives clues about where Volvo may take the styling of its cars in the future.

Back in September last year the Swedish manufacturer launched the Volvo Concept Coupe – a stylish two-door coupe model designed to rival the BMW 4 Series and Audi A5. Although only a concept car, it featured a petrol-electric hybrid engine, for a decent mix of performance and low running costs.

Initial pictures of the Volvo Concept XC Coupe only showed the roof and rear of the car, but hinted at a three-door SUV – similar to the Range Rover Evoque. Although totally new, it was a nod to current Volvo models – with rear lights resembling those found on the 2013 Volvo XC90 and Volvo XC60.

The latest images seen here show a rugged SUV concept car, which Volvo says builds on the brand’s proud history of Cross Country and XC products. With a brand-new Volvo XC90 due to go on sale in 2015, it seems likely that the Concept XC Coupe will influence the styling of Volvo’s next big 4x4.

The current Volvo XC90 is a seven-seat SUV that first went into production back in 2002 and is the largest of the three models in the Volvo XC range. Only available with a 2.4-litre five-cylinder diesel engine and automatic gearbox, it’s expensive to run compared to newer rivals like the BMW X5 and Range Rover Sport, but is still considered an appealing choice thanks to its decent practicality and class-leading safety features.

Other XC models in the Volvo range include the smaller Volvo XC60 and Volvo XC70. The latter is based on the Volvo V70 estate and boasts decent levels of comfort and a big, practical boot.

Sources at the Detroit Motor Show revealed that Volvo will launch a compact SUV – possibly called the Volvo XC40 – in the next few years, too. It forms part of the brand’s plan to double worldwide sales by the year 2020.

Speaking at the Detroit Motor Show, Volvo CEO, Hakan Samuelsson said: “The core models (XC90, XC60, S60 etc) are a first priority but then you can think of some additional models, maybe first on my list would be a smaller SUV.”

You can find out more about the upcoming Volvo XC90 by reading our news, price and release date article, or for the full Volvo range, visit the Carbuyer Volvo reviews page.