Save £2,725 off the price of a super-practical Chevrolet Orlando seven-seat MPV 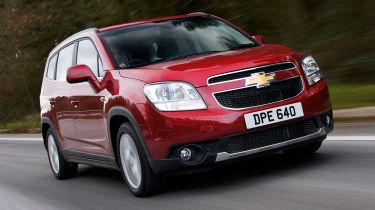 You can now get a whopping £2,725 off the Chevrolet Orlando MPV in LT specification, meaning the seven-seater people carrier starts from only £16,195.

With excellent build quality and plenty of equipment, the Orlando takes on rivals such as the Citroen Grand C4 Picasso, Ford Grand C-MAX and the Renault Grand Scenic, but manages to undercut most of its competition thanks to its low list price. It comes in three trim levels – the entry-level LS, mid-range LT and range-topping LTZ.

While it may be hard work to achieve the 38.7mpg that Chevrolet promises from the 1.8-litre petrol engine, economy from the diesel engines is more realistic – returning almost 50mpg with a manual gearbox.

It handles motorway driving surprisingly well, and given the size of the vehicle, feels controlled, quiet and there’s plenty of grip through corners too. The diesel engines also tend to make for a more comfortable ride, as they are quieter at higher speeds.

With the seats folded flat there's loads of room to carry bulky items, and access is well thought out in the Orlando, too. It features large doors and a square rear end that makes loading children and luggage a breeze. While the middle row of seats doesn’t slide (like in many of its rivals), it’s still easy for even the tallest passengers to get in and get comfortable.

The Orlando comes with a five-year warranty, which includes a servicing package and roadside assistance that should ease worrying minds. While Chevrolet isn’t exactly known for its sturdy build quality, the Orlando is a big improvement – particularly in terms of reliability and dependability.

It offers peace of mind in terms of safety, too, having scored the full five stars when it was put through its paces in the Euro NCAP crash safety tests. Plus, there’s loads of safety equipment as standard, including electronic stability control, traction control, brake assist, anti-lock brakes, ISOFIX child seat anchor points and six airbags. There’s also a crash sensor that will automatically unlock the door if you’re involved in an accident.

Standard equipment is also generous, with features such as air conditioning, electric front windows, electrical and heated mirrors and iPod compatibility all included across the range.