"The Chevrolet Orlando offers chunky looks, a comfortable ride and plenty of space, but it's the low price that'll attract most buyers."

The Chevrolet Orlando is a seven-seater MPV, which competed with cars such as the Citroen C4 Picasso, Ford C-MAX and Renault Scenic. That said, it had added appeal thanks to chunky styling that made it look quite like an SUV.

There was plenty to recommend about the Orlando, but as a result of Chevrolet's decision to stop selling new cars in Europe, you can no longer buy a new one in the UK.

The Orlando sported a spacious cabin, with plenty of storage areas, and a third row of seats that folded into the boot floor when not needed. The Orlando also had useful family features such as a second mirror up front, for keeping an eye on the kids in the back.

The Orlando's petrol engines felt underpowered and were heavy on fuel, so we'd recommend going for one of the diesels, which were more economical and also better suited to moving the big MPV. The model range started with the basic Chevrolet Orlando LS and ended with the top-spec Chevrolet Orlando LTZ Executive.

Although you can no longer buy a new Chevy Orlando, read on to see what we thought of the car back in 2012...

Economy and emissions trail class leaders, but insurance should be cheap

The Chevrolet Orlando is at its most economical when fitted with a 2.0-litre diesel engine and a manual gearbox. In this form, it can return economy of up to 52.3mpg and CO2 emissions of 139g/km for road tax of £130 annually.

The 1.8-litre petrol is best avoided, because it's both heavy on fuel and slow, but the more modern 1.4-litre petrol sees 44.1mpg and is the pick of the petrols. Buyers can choose between a six-speed manual gearbox and a six-speed automatic, although the latter reduces fuel economy by roughly 10mpg. 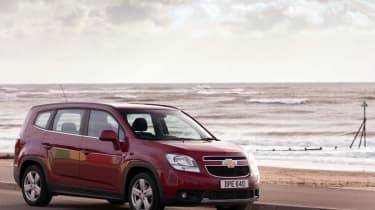 The Orlando should be cheaper to insure than most of its rivals and it only needs servicing every 20,000 miles. The fact that Chevrolet stopped selling cars in the UK in 2015 shouldn't concern you, as servicing can be carried out both at Chevrolet and Vauxhall dealers.

Economical and powerful diesels make the Orlando an accomplished cruiser

The basic 1.8-litre petrol may be the cheapest engine to buy, but it also feels underpowered and is expensive to run. The more up-to-date 1.4-litre petrol is both faster and more economical, although it costs more initially.

Really though, you should ignore both petrols and opt for one of the diesels that come with either 128bhp or 160bhp. The top-of-the-range version can get from 0-60mph in 10 seconds, but both feel quick enough for the Orlando’s purposes.

The Orlando's firm suspension means it's surprisingly resistant to leaning in corners, but it's also not as comfortable as rivals like the Citroen C4 Picasso. Meanwhile, its light steering counts against it in corners, where it offers very little in terms of driver enjoyment.

Supple ride and roomy cabin will appeal to family buyers

In terms of comfort, the diesel engines make the most sense because they're quieter than the petrols, although the Chevrolet's upright body means there's still some notable wind noise inside. The suspension is also quite firm, so passengers are likely to feel some lumps and bumps. Choosing the larger 18-inch alloy wheels makes this worse, so we'd recommend sticking to the smaller versions. In general, though, the Orlando is a comfortable place to sit and all the seats offer plenty of space. 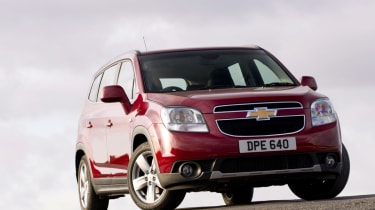 As with many seven-seaters, when the third-row seats are up, the Chevrolet Orlando's boot is small, at just 79 litres. The seats fold down easily, though, to free up 1,499 litres of luggage capacity.

All the seats in the Orlando are fairly comfortable – even the ones in the third row. Unlike in some rivals, the Orlando's second-row seats don't slide backwards and forwards, but aside from this everything in the car seems to have been designed with the family in mind.

That means you get wide door openings and loads of cubbyholes, including a glovebox, decent-sized door bins, two cup-holders and a storage area between the middle seats, as well as a concealed space behind the stereo and two 12v sockets for charging electrical items.

Chevrolet only offers a three-year warranty, but safety is top-notch

Chevrolet didn't do particularly well in our Driver Power 2013 owner satisfaction survey, finishing 20th out of 32 brands, although that was still better than 2012, when it failed to rank at all, and 2011, when it came dead last. Chevrolet's warranty, which lasts for three years or 60,000 miles, can be extended, and covers cars up to 10 years old. It's worth mentioning that the Chevrolet's interior doesn't feel as well built as rivals such as the Volkswagen Touran.

With a five-star rating from Euro NCAP, safety standards in the Orlando are high and it comes with two ISOFIX mounts for child seats, six airbags, and electronic stability control.

The Chevrolet Orlando may be thousands of pounds cheaper than some of its rivals, but it'll also lose more value by the time you come to sell it on. Basic Chevrolet Orlando LS models get a reasonable amount of equipment, including air-conditioning, electrically heated and adjustable door mirrors, DAB digital radio, and automatic headlights, but top-of-the-range LTZ Executive models add accessories such as cruise control, automatic wipers, climate control and a leather interior.

Show me:
Chevrolet Orlando deals: Car deal of the week 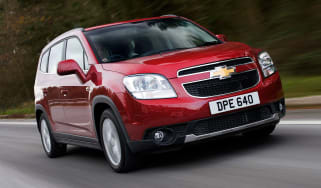 Save £2,725 off the price of a super-practical Chevrolet Orlando seven-seat MPV
Skip to ContentSkip to Footer