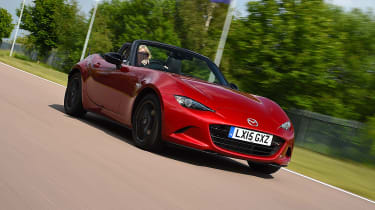 Full details of the new Mazda MX-5 have been revealed, including the price and trim levels for one of the most eagerly awaited cars of 2015.

The new roadster maintains its status as an affordable sports car, as it's priced from £18,495. It's more than 100kg lighter and more powerful than its predecessor, which should translate into a much more entertaining driving experience. 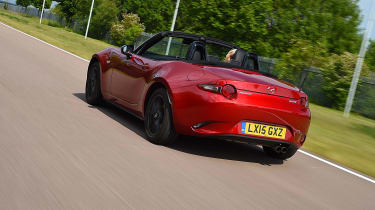 The latest MX-5 is shorter, lower and wider than the outgoing model and Mazda has shaved weight off the new car by using lightweight aluminium for the bonnet, boot and numerous other parts of the body. This means the newest version of the roadster is the lightest model since the original was launched in 1989.

Mazda says the new MX-5 is built around the philosophy of "innovate in order to preserve," which means the new model will be as fun to drive as ever, but adhere to modern safety and efficiency standards.

The latest MX-5 should be even better to drive than before, as it has the same rear-wheel-drive chassis as all MX-5s to date. Sophisticated, lightweight suspension will reduce body lean in corners, but we expect the MX-5 to remain comfortable on longer journeys. From launch, the car will only be offered with a six-speed manual gearbox, while powerful brakes and the car's lightweight construction mean it should stop quickly, too.

The simple philosophy of the new MX-5 means the model is competitively priced – the cheapest 1.5-litre SE version starts at £18,495. If you want more power from your roadster, a 2.0-litre engine is available from £20,095. Even the most expensive model, priced at £23,295, is only around £1,000 more than an entry-level Peugeot RCZ and around £7,000 less than the most basic Audi TT Roadster. 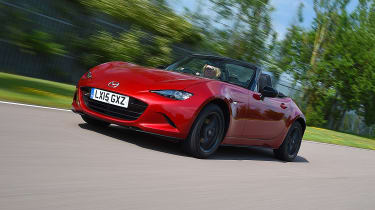 The new model is available to pre-order now and officially goes on sale from August 29. Mazda has confirmed that a coupe version of this MX-5 will be released, but the design is yet to be finalised. There's speculation that the hard-top model could be a different shape to the roadster, but nothing's been confirmed yet.

Striking looks mark the car out from the third-generation version it replaces. The sculpted body surfaces are typical of Mazda's Kodo design philosophy, while the new car is 105mm shorter, 20mm lower and 10mm wider than the old model, giving a compact, taut look. 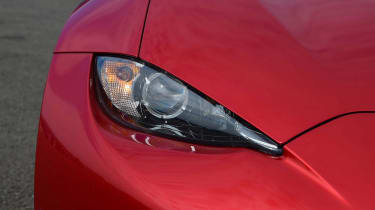 The gaping front grille and low nose mean the new car looks much sportier than the outgoing MX-5, while bulging wheelarches give it a more muscular design than the original MX-5 from 1989. At the rear, there's a chiselled bumper, circular tail-lights and twin exhaust pipes.

Inside, there’s a sporty layout, with plenty of influences taken from across the Mazda range, while the exterior body colour flows into the cabin. Mazda has paid a lot of attention to the car's controls, so finding a comfortable driving position is easy, while the large windscreen and thin pillars give excellent visibility. The car's folding fabric roof can be operated from the driver’s seat.

The Mazda's simple design means that it's unlikely to come loaded with equipment that would push its weight up, but it'll get the latest version of Mazda's MZD Connect infotainment system. That can be used to control everything from the sat nav to the stereo.

Mazda is taking full advantage of its efficient SKYACTIV engine technology in the MX-5, offering 1.5 and 2.0-litre SKYACTIV-G petrol engines at launch.

The company is also considering a diesel engine, which would be a first for the Mazda MX-5. The UK car market is driven by low running costs, so a diesel MX-5 could sell well here. Key rival the Mercedes SLK has been available with a 2.1-litre diesel engine since 2011. 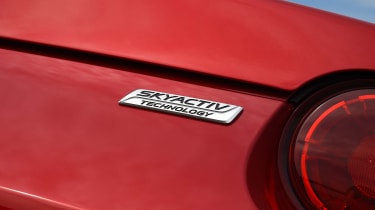 Step up to the mid-range SE-L and you're treated to climate control, LED daytime running lights and the previously mentioned MZD touchscreen infotainment system, which includes DAB digital radio, Bluetooth phone connectivity and two more speakers in the driver's headrest.

Nav models, as the name suggests, add satellite navigation to the touchscreen system.

2.0-litre versions get a limited-slip differential, which will improve grip, as well as larger 17-inch alloy wheels.