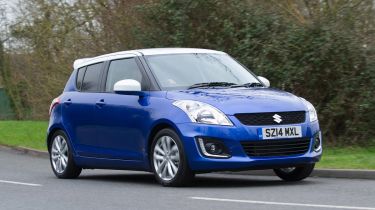 Suzuki has announced the return of a special edition version of its Swift supermini. The Suzuki Swift SZ-L is based on the 1.2-litre Swift SZ3 model, and counts two-tone metallic paint among its list of features.

In addition to the choice of Boost Blue or Cosmic Black paint, the Swift SZ-L features a roof, rear spoiler and door mirrors all finished in contrasting white paint.

The Suzuki Swift SZ-L, which carries a price premium of £800 over the standard Suzuki Swift SZ3, features the full range of equipment found on that model, including seven airbags, air-con, LED interior lighting, a USB port and Bluetooth connectivity, and an electronic stability control system to improve grip at high speed.

Just one engine is available in the SZ-L edition: a 93bhp 1.2-litre petrol engine. Suzuki claims it is capable of achieving 56.5mpg, while emissions of 116g/km means it costs £30 a year in road tax. Insurance is group 11, meaning it should be affordable for young drivers.

Suzuki is also offering a range of personal contract hire plans, meaning the five-door model is available for £145 a month for 42 months with an initial payment of £1,740.

Customers looking to buy can choose a personal contract purchase (PCP) option, with the five-door available for £149 a month over 42 months with a deposit of £1,699.

For more on the current Suzuki range, visit the Carbuyer Suzuki reviews page.