More kit for new Hyundai i20 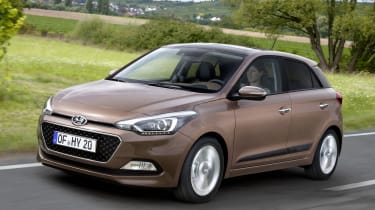 The range starts with the entry-level Hyundai i20 S model, which features electric front windows, remote central locking, tinted windows an a stereo radio with a USB port, but you'll need to spend another £750 for the i20 S Air to enjoy air-conditioning. Both models feature a 1.2-litre petrol engine.

Hyundai expects the biggest seller to be the well equipped i20 SE model, which starts at £12,725. It comes with 16-inch alloy wheels, voice-activated Bluetooth phone connectivity, cruise control with speed limiter, a lane-departure warning system, rear electric windows and rear parking sensors. SE models come with a choice of 1.2 and 1.4-litre petrol engines as well as 1.1 or 1.4-litre diesels.

The i20 Premium model adds a range of features usually found on more luxurious cars, including automatic headlights and wipers, climate control, LED lights and tinted glass. A smartphone dock is also fitted as standard and is compatible with the Apple iPhone 5, 5s, 6 and a range of Samsung Galaxy devices. The i20 Premium is priced from £13,725.

At the top of the range sits the i20 Premium SE, which adds front parking sensors, plus heated front seats and steering wheel, along with an opening panoramic glass sunroof. The i20 Premium SE costs from £14,725.

Both the Premium and Premium SE models are available with the i20’s full range of engines, apart from the 1.1-litre diesel.

Hyundai says the second-generation i20 is the only car of its type to be available with an opening panoramic glass sunroof and claims the 326-litre boot is among the biggest of any supermini. It's worth noting that the SE, Premium and Premium SE models have a slightly smaller boot.

A built-in touchscreen sat nav system is on the options list.

Standard safety equipment includes six airbags, a tyre-pressure monitoring system and a range of electronic features to improve grip and stability at speed.

Hyundai i20 Premium (in addition to SE)

Hyundai i20 Premium SE (in addition to Premium)