Mercedes’ CLA Shooting Brake will add extra practicality to the range when it goes on sale in January, priced from around £25,700 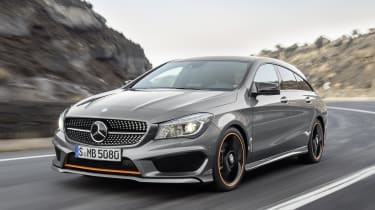 The Shooting Brake is the same length as the Mercedes CLA saloon, and is identical from the nose to the door pillars. From the middle of the car back, the car is all new, with an attractive sloping bootline and sporty profile.

Despite being similar in shape to an estate car, the CLA Shooting Brake offers just 495 litres of luggage room, up from the saloon’s 470 litres. The rear seats can be arranged in a more upright position, adding a further 100 litres to the boot capacity. Rear passenger space is also more generous, with 41mm of extra headroom answering criticisms the the CLA saloon’s sloping roofline cuts into head space.

Engine options are unchanged from the standard CLA, with a variety of petrols and diesels ranging from ultra-frugal to super-fast.

The four-wheel-drive 208bhp CLA 250 4MATIC model will only be offered as an ‘Engineered by AMG’ version, while a new CLA 220 CDI 4MATIC will launch as a Shooting Brake and then be rolled out across the range in September 2015.

Available in March, the CLA45 AMG Shooting Brake uses the same 2.0-litre turbocharged four-cylinder petrol engine as the saloon and A45 AMG hatchback, developing 355bhp. It's capable of doing 0-62mph in 4.7 seconds – two tenths slower than the saloon – and has a top speed limited to 155mph. 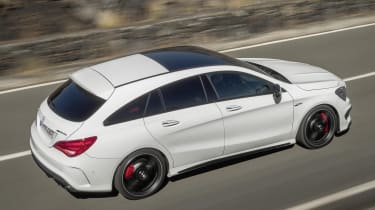 The standard CLA Shooting Brake will be available in the same four trims as the saloon: Sport, AMG Sport, Engineered by AMG and AMG.

Due to its slightly heavier and less slippery body, the CLA Shooting Brake is a little less efficient than the saloon. However, the CLA 200 CDI still returns 72.4mpg, with CO2 emissions of 101g/km.