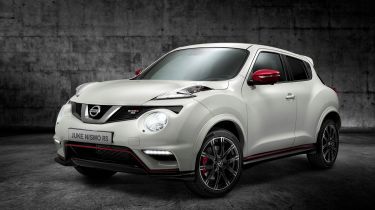 The eighth model to be released by Nissan this year offers 215bhp from a 1.6-litre turbocharged petrol engine. The Juke Nismo RS is available in two-wheel drive and four-wheel drive versions – the latter is also fitted with an automatic gearbox.

The two-wheel drive version has a six-speed manual gearbox, and sends its power to the front wheels through a limited slip differential, which improves grip and stability at speed. Four-wheel drive models use a torque vectoring system which performs a similar role.

Nissan has also strengthened the body in the pursuit of producing a more entertaining drive. Larger, more powerful brakes are fitted and there’s a new suspension setup.

Despite the increase in performance, the Juke Nismo RS is as practical as other models in the range. Two-wheel drive models have a boot 40% larger than four-wheel drive models, thanks to the inclusion of underfloor storage.

A range of options are available, including Recaro sports seats and the Safety Pack which features 360-degree parking cameras and a range of features to give visual and audible warnings to avoid collisions.