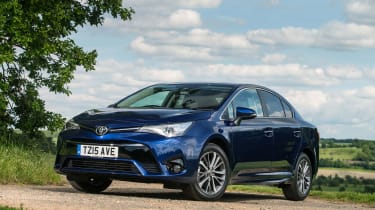 The Toyota Avensis saloon and Touring Sports estate models have been heavily revised for 2015. The latest incarnations feature revised styling and new engines.

These images show a new front-end redesign aimed at keeping the big saloon and estate on buyer's shortlists in the face of a raft of new rivals.

The new Avensis has grown in length by 40mm overall and Toyota say the new LED headlight clusters give the new Avensis an “individual illumination signature.” 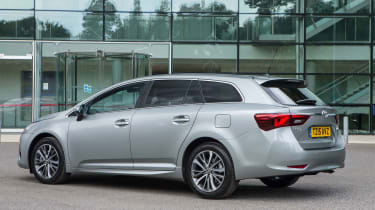 The front end looks similar to the latest Toyota Yaris model; the front fog lights have been pushed to the bottom corners which help the car look wider, while the low front grille makes the Avensis appear lower too.

At the rear, a blend of the Auris hatchback and the outgoing Avensis model can be seen in the subtly revised wrap-around light clusters and rear bumper.

Toyota promises both “performance and efficiency” from a revised engine line-up and all of the new engines will meet the forthcoming Euro 6 emissions regulations.

The brand has developed new 1.6- and 2.0-litre D-4D diesel engines for the Avensis, with the smaller 1.6-litre engine emitting just 108g/km and a claimed fuel economy figure of up to 67.3mpg. 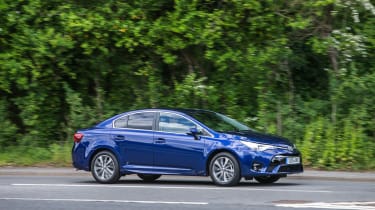 The 2.0-litre D-4D diesel, which makes its debut in the new Avensis, manages 62.8mpg and emits 119g/km of CO2. This will most likely be the engine of choice for company car buyers.

All engines will be available with a six-speed manual gearbox and the 1.8-litre petrol can also be specified with a CVT automatic similar to the one used in Toyota's hybrid models.

Toyota seems to be aiming the new Avensis models at the company-car market, particularly with the new Business Edition and Business Edition Plus trim levels. The edition will feature Toyota's Touch 2 multimedia interface system, part-Alcantara seat upholstery, a reversing camera and rain-sensing wipers.

The Business Edition Plus model adds leather and Alcantara upholstery, LED headlights, front foglights with a turning function and a ‘smart entry’ system. 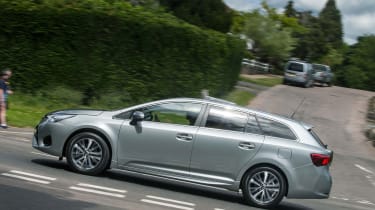 The "Business" based trims sit in between the entry level Active model and the top-of-the-range Excel.

Inside, drivers are treated to a heavily revised interior, including a 4.2-inch screen set among the instruments. This will be used for connectivity, navigation and safety functions.

The Avensis saloon and Avensis Touring Sports estate models will also be the first models in the range to get Toyota's Safety Sense collision-avoidance kit and active safety technology.

Models above the base Active trim feature lane-departure warning and an automatic high-beam function, which dips the headlights if it detects another car coming towards you. 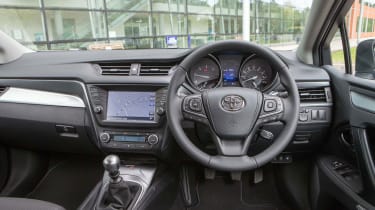 A pre-collision system scans the road ahead and alerts drivers of when a crash is imminent. If the driver doesn’t react quickly enough, the Avensis steps in and brakes for them. The system works between six and 49mph, so it works particularly well in urban driving.

Road Sign Assist notifies drivers of speed changes and warning signs like “no overtaking. If the driver begins to speed, the system will buzz and a warning light will flash.

The new Avensis starts from £17,765 for an entry-level Active saloon with 1.8-litre petrol engine. It’s on sale now, with the first official deliveries arriving towards the end of June.