Peugeot has made some changes to the 208 hatchback range, including adding a super-efficient diesel

The Peugeot 208 will sport a new look, extra equipment and added safety when a revised version goes on sale in June. The range will now include a diesel engine capable of more than 94mpg.

The clearest evidence of the changes is revised exterior styling. Changes to the 2015 Peugeot 208 include a new front bumper and grille, plus headlights that feature black and chrome inserts.

Changes inside the new 208 vary according to trim level, but mid-spec Active models and above will feature a leather steering wheel. All models feature improved trim parts.

Apart from the entry-level Access trim, all 208 models will also feature a seven-inch touchscreen that allows you to operate the stereo, sat-nav, phone and car information functions. It can also connect wirelessly to a smartphone, allowing access to a range of apps. A MirrorScreen function allows you to transfer your smartphone screen to the car's touchscreen.

New safety features include automatic emergency braking (which can apply the brakes to avoid a shunt), a reversing camera and the ability to enter and exit a parking space automatically.

Peugeot has also expanded the range of 208 personalisation options, which now includes different exterior trim panels and badges. More body colours are available, too: a new metallic Orange Power shade is among the 13 choices.

All of the engines available in the 2015 Peugeot 208 meet the latest Euro 6 emissions standards. Standout engines include the BlueHDI diesels, every one of which emits less than 95g/km of CO2, meaning they're free from road tax. Three BlueHDI engines are available, producing 75bhp, 100bhp and 120bhp respectively.

Peugeot says the 75 and 100bhp versions are capable of an impressive 94.1mpg – better than any other diesel engine on sale.

The new Peugeot 208 will also see the introduction of a new trim level. The Peugeot 208 GT Line adopts some of the styling seen on the Peugeot 208 GTI hot hatch. Engine options consist of a 110bhp 1.2-litre petrol or 100 and 120bhp versions of the 1.6-litre BlueHDI diesel. 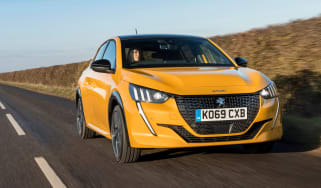