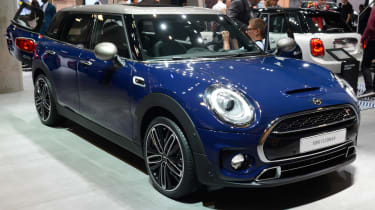 Having revealed the new version of its estate-like MINI Clubman model, the British brand has now confirmed the full engine range for the car. Two petrol engines and one diesel will be available at launch, with a further petrol option and two more diesels added at a later date.

The new MINI Clubman, which retains the split boot doors of its predecessor. But while the previous model had full-size front doors and just one small rear door on the driver’s side, this new model has four full-size side doors for better access to the back seats.

The Clubman name harks back to a MINI model from the early seventies and was revived in 2007 with the first new-generation MINI estate.

MINI claims that the new Clubman “is a powerful fusion of sleek lines, innovative touches and first-rate materials with generous space for five occupants”.

Although the Clubman still sits on the same platform as the standard three and five-door MINI hatchbacks, as well as the BMW 2 Series Active Tourer, the rear half has been stretched. This allows for a boxier rear, which gives both additional boot space and extra headroom for rear passengers. 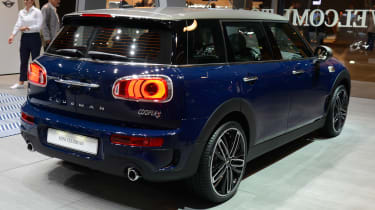 The classic split rear boot doors are retained. This quirky design feature goes against the grain for estate cars, which normally have a standard boot hatch.

The front end is instantly recognisable as a MINI, as the large headlamps and chrome-trimmed front grille have been carried over from the hatchback. The high-performance Clubman S model will also feature the classic central bonnet scoop.

Roof rails can be specified and the roof itself can be finished in contrasting colours to the rest of the car, such as a white gloss.

At the rear, the aforementioned boot doors get a chrome-finished central handle and the lights have been widened.

Inside, much of the dashboard remains unchanged from the hatchback. You still get the massive round central unit that houses either a 6.5 or 8.8-inch touchscreen, depending on the exact specification. The classic MINI toggle switches underneath also remain, with a central one finished in red acting as the starter button. All Clubman models have sat nav as standard. 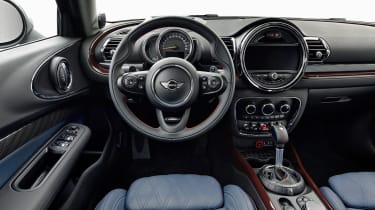 The centre console now has two cup-holders and an armrest as standard, while there’s even the option of a telephone compartment, too.

MINI will offer a wider range of personalisation options than usual with the Clubman, under the heading of ‘MINI Yours’. This means you can change the colour and trim of various interior panels to your preference. The MINI Excitement Pack adds ambient interior lighting and an illuminated MINI logo that’s projected onto the ground from under the door mirrors.

Since most Clubman buyers will likely be looking for plenty of interior space, they’ll be pleased to hear that a total boot space of 360 litres is available. That’s roughly 100 litres more than the five-door MINI hatchback, and it can be expanded to 1,250 litres by folding the rear seats flat. They split 60:40 as standard, but for extra flexibility an optional 40:20:40 split is available.

The new Clubman will feature two petrol engines and one diesel at launch, with additional engines following at a later date. All meet the latest Euro 6 emissions standards that come into effect in September 2015.

Equipped across the range, the brand’s 'MINIMALISM' technology comprises features like brake-energy regeneration, active air flaps that move within the vents and a gearchange indicator to help you drive as efficiently as possible.

The 2.0-litre diesel in the MINI Cooper D Clubman is a brand-new engine that makes its debut in this Clubman. It makes 150bhp, so should ensure the car stays nippy and responsive even with the whole family or a full load on board. At launch, you can also have a 192bhp four-cylinder petrol (MINI Cooper S Clubman) or a 136bhp petrol (MINI Cooper Clubman). 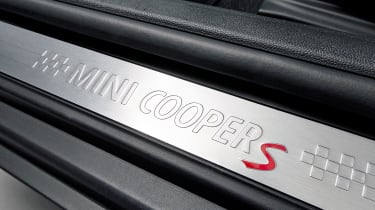 A six-speed manual gearbox is fitted as standard to all Clubman models, but MINI’s six and eight-speed Steptronic automatics are available as options. The Cooper model can be fitted with the six-speed version, while the Cooper S and Cooper D have the option of the eight-speed version.

Priced from £19,995, the new MINI Clubman is available to order now, with deliveries beginning at the end of October.

For more on the MINI range, including the three and five-door hatchbacks, visit Carbuyer’s reviews page.