The Italian brand's new city car is on sale now, priced from under £11,000 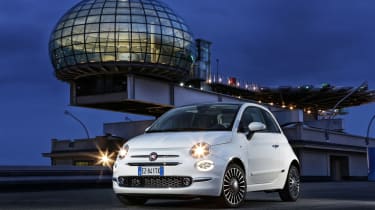 The new Fiat 500 hatchback is now on sale, having been launched back in July. There's both a standard hatchback model and a roll-top convertible version called the 500C.

Since the first version of the reborn Fiat 500 went on sale in 2007, Fiat has sold more than 1.5 million examples, with a large proportion of those ending up in the UK. In fact, the 500 frequently appears on our top 10 best-selling cars list.

The 500's desing seems little changed from the previous version at first glance, but Fiat assures us the new 500 has benefitted from "no fewer than 1,800 innovative detail changes". 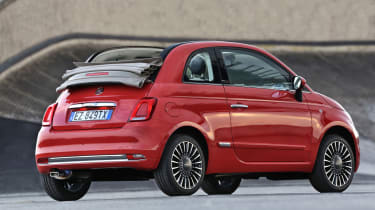 The city car maintains its small dimensions and its silhouette is largely unchanged, too. There are minimal overhangs (the amount of bodywork ahead and behind of the wheels) and the optional panoramic roof makes the interior brighter and airier.

At the front, the new headlight design is the most obvious change. The upper lights house the usual dipped headlights and indicator lamps, but the lower set has been changed to feature a bright halo effect "so that the new 500 will now stand out, even when it's dark". Other than that, the front end has only been subjected to minor tweaks.

It's the same story at the back. The main rear light clusters are the most obvious change, as they’ve been redesigned to look like rings, with a body-coloured panel in the centre. Fiat says the new light clusters mean that "light appears to emanate from the bodywork almost like an illuminated tattoo". 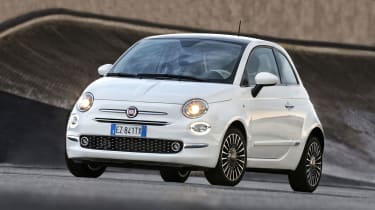 There are all-new alloy wheel designs available, in either 15 or 16-inch sizes. A total of 13 colour finishes are available, too, including the new Corallo Red and Avantgarde Bordeaux colours. Plus, for even more personalisation choices, there are the 'Second Skin' packs.

Fiat states that these design changes "all combine to give the new 500 a cheeky look to help it charm its way through congested city traffic".

The new Fiat 500's interior has had a more robust redesign. The colour co-ordinated dashboard remains, with one solid piece of retro Bakelite-like plastic running from side to side.

The instrument cluster is either analogue or digital, but driver information is displayed on a circular TFT screen. Plusher models will feature an all-digital setup. 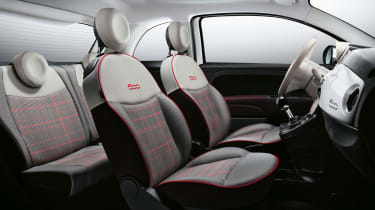 The steering wheel still has the three-spoke design of its predecessor, but has been thoroughly modernised. Gone are the chunky spokes – they’re now thinner and can be trimmed in chrome. The black circular logo still features in the centre and wheel-mounted buttons are standard on all models.

New materials are used on the seats and the rear seats split and fold 50:50 to expand the available luggage space. 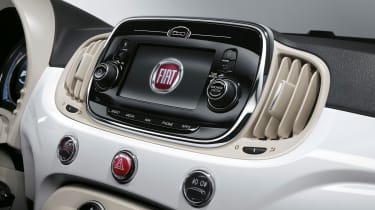 The Uconnect system is new to the 500 model range. The Uconnect LIVE version comes with tonnes of extra features. If you use the Deezer music streaming service, the new 500 gives you access to the platform's 100,000 worldwide music stations.

The system can also access the car's eco:Drive app, which tracks your driving style and gives you tips on how to improve fuel economy. Fiat claims the app can contribute to a 16% improvement in fuel efficiency.

There's also the option to specify a TomTom sat nav system – a first for the 500. For the full specification list, see below.

The new Fiat 500's engines will be somewhat familiar to owners of the current model, but the range has been subtly updated. Other than the ageing 1.2-litre 69bhp petrol, all of the other engines emit less than 100 grams per kilometre of CO2.

The Italian brand's famous 900cc TwinAir petrol engine returns in both 85 and 105bhp power outputs. The 85bhp version has claimed fuel economy of 78.5mpg and CO2 emissions of just 89g/km. 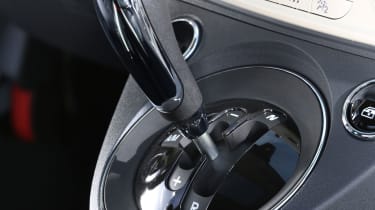 The familiar 1.2-litre 69bhp engine remains the entry-level option and has its own 'Eco' configuration. A liquid petroleum gas (LPG) version will also be available at launch, but is aimed more at continental European markets than the UK.

A five or six-speed manual gearbox will come as standard, but some engines will have the option of 'Dualogic' automatic transmission.

To ensure the maximum five-star crash-safety rating from Euro NCAP, the new Fiat 500 has seven airbags as standard along with the usual traction control and electronic stability control.

The new Fiat 500 is priced from £10,890. That's roughly £200 more than its predecessor. It's on sale now and available to order from dealerships or Fiat’s website.

For more on Fiat’s current range, including our full review of the new Fiat 500, check out Carbuyer’s reviews page.