"The Fiat 500 has an unashamedly retro style, but fairly economical engines, making it a strong city-car performer"

Some best-selling cars draw heavily on the past for their design inspiration, but the Fiat 500 takes that even further than most. If you place this second-generation ‘new’ 500 next to its 1960s forebear, it's clear just how close the resemblance is – albeit enlarged by about 50%.

Like the MINI hatchback and now-discontinued Volkswagen Beetle, though, the 500's retro looks are only skin deep – its oily bits are slightly more up-to-date. The same is true inside, where its charmingly quaint appearance mixes with technology such as Bluetooth phone integration and air-conditioning. An update in 2016 helped keep the 500 up-to-date, but an all-new fully-electric version of the Fiat 500 was introduced in 2021, and is now sold alongside the conventional petrol powered line-up.

Fiat is right to think there’s still life in the second-generation 500, though, even if the third-generation Fiat 500 represents the future of the model. The electric 500’s new design is a further evolution of the model’s looks, and it features a more modern interior design with upgraded infotainment. The trouble is, it’s expensive, with a starting price of around £23,500 in Action trim.

The 'classic' version of the 500 now exists as a value proposition for Fiat buyers who aren't quite ready to make the switch to an electric car, and it remains an alternative to the Hyundai i10 and Peugeot 108. It's three-door only, so might not be the most practical choice for a young family, but it's rich in upmarket appeal and looks right at home sharing driveway space with a Mercedes or Porsche.

Like the MINI, the 500 has been successful enough since its rebirth almost a decade ago to hatch a whole range of cars, which includes the far larger Fiat 500L MPV and Nissan Juke-rivalling Fiat 500X crossover – the first of which stretches the 500's retro identity to near breaking-point. The Fiat 500C convertible, meanwhile, adds fresh-air appeal to what's already a fun package, while the Abarth 595 hot hatchback adds a huge shot of adrenaline to the 500's frothy cappuccino. 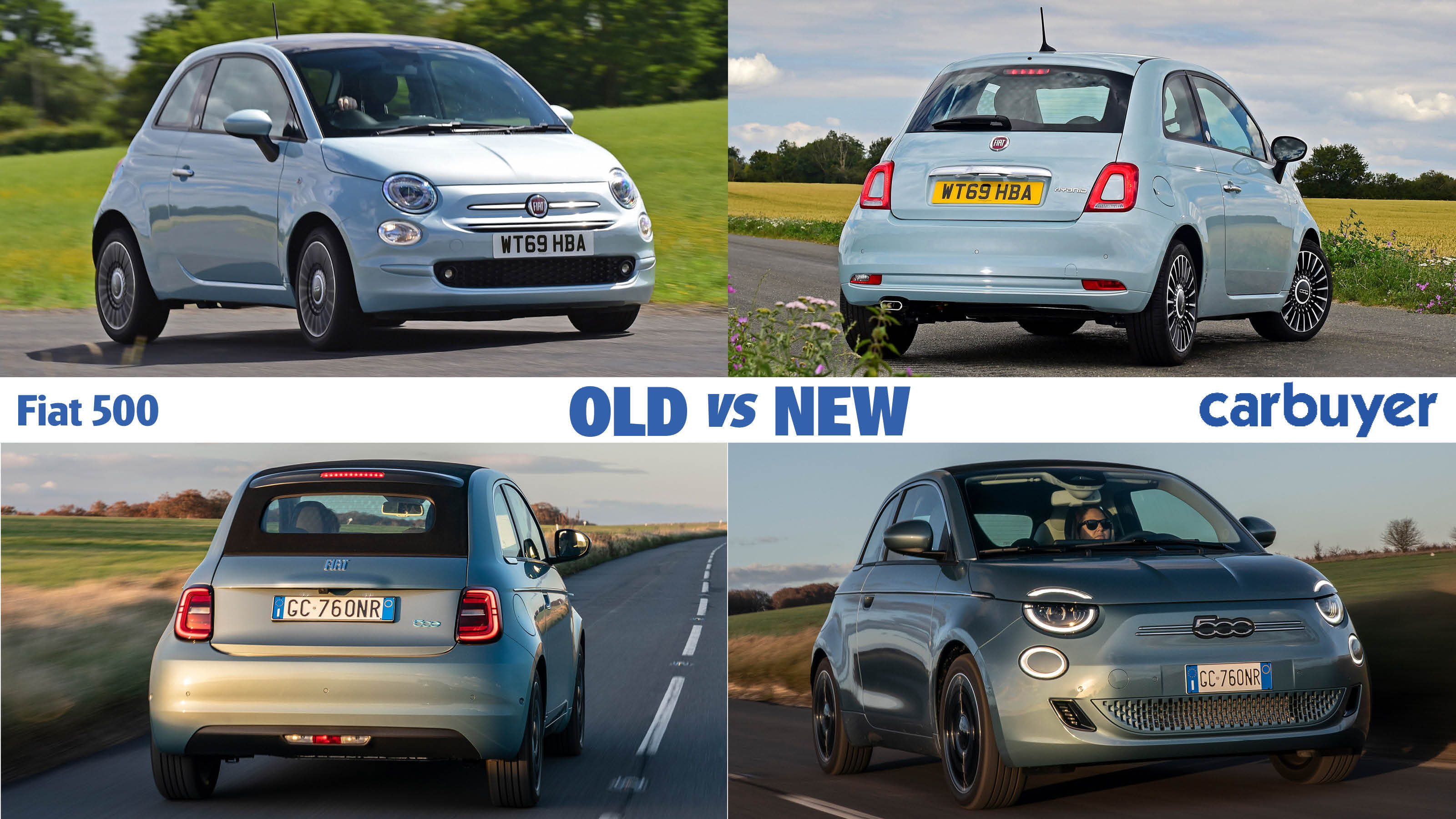 Crucially, Fiat has avoided fiddling with the 500's much-loved formula too heavily since 2007 – only a handful of relatively trivial external updates separate the earliest cars from the latest examples.

In recent years the 500 has been available with an entry-level 68bhp 1.2-litre four-cylinder petrol engine which has proved popular due to its cheap price and steller fuel economy of around 46mpg, but felt slightly underpowered. There was also a 0.9-litre two-cylinder TwinAir engine which was more fun with 84bhp, but both have now been discontinued.

Fiat has also introduced the 500 Mild Hybrid, fitted with a new 1.0-litre petrol engine and 12-volt mild hybrid technology. It stores energy into a compact battery as the car decelerates, with a starter generator to assist acceleration that also helps improve stop and start so it works more effectively. It can manage fuel economy of up to 53.3mpg and 88g/km CO2 emissions - an improvement of 30% over the old 1.2-litre petrol engines.

Driving the Fiat 500 is simplicity itself – you sit quite upright with great visibility, and the small size and light steering means it really feels at home in the urban jungle – particularly when the ‘City Steering’ button is used to take unwanted weight from the steering when you’re manoeuvring at parking speeds. It doesn’t feel out of its depth beyond the city limits either; all models acquit themselves fairly well on the motorway.

The interior design highlight is a dashboard colour-matched to the exterior paintwork to give a real ‘classic car’ feel. The rather upright seating position and tall roof means four adults can fit inside, but getting in the back is a bit awkward. And, although few will choose a city car for its luggage space, the 185 litres on offer here is considerably less than the 250 litres in a Volkswagen up! and Hyundai i10.

Speaking of trim levels, permanently resident in the range is the Pop entry model, but Fiat has traditionally offered special-edition versions that change frequently and tend to add unique styling, colours and wheels, along with different equipment and upholstery. Pop gets some desirable features like LED ‘halo’ daytime running lights, electric windows and a USB connection, but we’d recommend upgrading to any of the other trim levels which come with a 7-inch touchscreen infotainment system, plus a selection of features such as air-conditioning, alloy wheels, rear parking sensors, cruise control, fog lights and a split-folding rear seat, which many people won’t want to do without. Currently the trims and special editions include Connect, Dolcevita, Dolcevita Plus, Hey Google and Sport.

Cars with the seven-inch infotainment system also get Fiat’s Uconnect system, including Bluetooth connectivity, DAB radio, Apple CarPlay and Android Auto. However, this system is starting to feel its age, particularly compared with the technology in the latest electric Fiat 500.

Reliability and safety both cause some concerns. All 500s come with seven airbags, anti-lock brakes, hill-start assistance and systems to help with emergency stops. But this final version of the second-gen 500 received a disappointing score of three out of five stars when it was crash-tested by Euro NCAP, so it falls well short of rivals in that department. The 500 finished 67th out of the 75 cars ranked in our 2021 Driver Power owner satisfaction survey of cars currently on sale in the UK.

What about buying a used or nearly new Fiat 500?

The Fiat 500 has been on sale since 2008 and as it’s been a big seller since then, there are absolutely loads of examples on the second-hand market. You can buy older models for a few thousand pounds or newer models for around the as-new asking price, but the best-value cars are somewhere in between.

The Fiat 500 arrived in 2008 and was an instant hit - buyers loved its retro looks and the simple mechanical parts meant that it was affordable to buy. Small engines kept running costs low as well, so it was especially popular with younger drivers.

The initial range included 1.2 and 1.4-litre petrol versions and a 1.3-litre diesel. A two-cylinder 0.9-litre TwinAir model was added to the range later, and then there were a few changes over the years that boosted the power of the diesel and TwinAir engines. A 1.0-litre ‘mild hybrid’ engine was added in 2020, too.

There was a facelift in 2015 that changed the look very slightly, but for the most part the 500 has had the same design all these years. This means even the early cars still look up-to-date and make a great used buy.

We’d make sure you buy carefully if you’re after a cheap early car, as they’re getting quite old now and may need repairs if you’re not careful. Go for a newer model and you can choose the excellent TwinAir engine - though it’s not the most economical - or the new 1.0-litre mild hybrid, which is really efficient. Avoid the diesel versions unless you do a lot of miles each year.

If you’re after low-cost motoring, check out our list of the 10 best city cars on sale today
Fiat 500 review
Fiat 500 electric

Looking for the smallest cars on sale in the UK right now? Read on for our rundown of the tiny cars that should be on your shortlist.
Fiat 500 RED editions launched as part of charity partnership
Fiat

Putting a hole in the roof can add a real feeling of light and warmth to a car's interior. Here's our rundown of the best panoramic sunroofs
Fiat and Abarth ranges updated for 2021
City cars

Fiat and Abarth ranges updated for 2021

Both 500L and 500X will be merged into one new model, probably electric
2020 Fiat 500 and Fiat Panda mild hybrid prices confirmed
Fiat

The Fiat 500 proved retro looks can go down a storm with buyers, so there are plenty to choose from on dealer forecourts
New look for sporty Fiat 500S
Fiat 500 hatchback

"The Fiat 500 Cult has lots of equipment as standard and can be customised to your heart's content."
Fiat 500 Sport
Fiat 500