What is in-car digital radio? Should your next car have it fitted? We reveal all

A digital radio is a more and more frequently a common piece of standard equipment in new cars. Depending on where you read about it, drivers account for between 25 and 50% of total radio listenership, so demand remains strong for good quality radios amongst car owners.

Digital radio, or DAB as it’s often known, offers a number of advantages over traditional analogue FM, AM or long wave radio, which is why manufacturers are replacing traditional radios with digital ones in their latest models.

DAB stands for Digital Audio Broadcasting and, as the name suggests, is a way of broadcasting radio digitally rather than via an analogue signal (the signal transmitted for FM/AM radio).

DAB was originally begun as a European research project in the 1980s and was developed because it was predicted to offer several advantages over traditional FM/AM analogue radio.

One of the biggest advantages of DAB is that it allows for a greater choice of stations. It’s superior to FM radio in terms of ‘spectral efficiency’, which means transmitters can broadcast more stations. The result is more choice for you when flicking through stations on your radio.

In most major cities, where there DAB coverage is at its most comprehensive, you can often receive more than double the number of radio stations with a DAB radio compared to an FM radio.

Another advantage is that DAB radio is less susceptible to noise and interference, which can manifest itself as fade, hiss or crackle on FM radio. DAB radios don’t suffer in this way because they maintain reception quality up until the signal becomes unsustainably weak, whereas the reception quality of FM radios gets steadily worse as soon as the signal begins to weaken. This is particularly relevant to people using radios in cars because constant movement means signal strength is likely to vary. 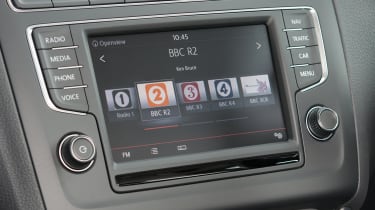 The third major advantage is that DAB is easier to use. Although FM car radios are usually fitted with RDS, which allows you to store stations as presets and switch between them without having to tune the radio in, you can’t store an infinite number. With a DAB radio, changing to another station is always one push of a button, and there is no seek feature that might find you the same station on a number of different frequencies, all in varying degrees of reception quality. DAB also provides more visual information such as the name of the station, programme, DJ, track name and artist playing.

Low sound quality is likely to be most noticeable in cars with high-quality stereo systems that are good enough to expose the shortcomings of low quality DAB broadcasts, but for most, this just isn’t an issue.

The BBC was one of the frontrunners in test transmissions of digital radio in the 1990s and perhaps the legacy of that is that the UK currently has the world’s biggest digital radio network. Despite this, DAB coverage is still not as good as FM radio in the UK and there is plenty of anecdotal evidence from DAB radio users to suggest it’s not always possible to pick up any DAB signal, particularly in more remote areas and away from big cities.

DAB radio – should I be concerned about whether my car has one?

The short answer is ‘yes’.

A number of manufacturers, particularly those towards the luxury end of the market, are increasingly likely to include a DAB radio with their cars as standard. BMW, for example, now does that across its entire range. DAB radios are also capable of receiving FM/AM signals, so you have the option of both rather than relying on one or the other.

At the moment there is no definitive date for the switch-off of analogue radio but it seems likely at some point. A date of 2015 was originally scheduled but was abandoned by the UK Government because uptake of digital radio has been too slow. Despite that, it therefore seems a sensible step to future-proof your new car by ensuring it comes with a DAB radio.

The impending switch-off shouldn’t be cause for huge worry though as it won’t come in the next few months; you’ll still be able to listen to the radio in your car for the foreseeable future, even if it doesn’t come with a DAB radio fitted. There will undoubtedly be options to retrofit DAB radios or adapt existing radios in cars when the switch-off does finally happen.

Many people like to have the most up to date technology in their cars when they’re buying a new one and having a DAB radio in your car may make it more desirable when you come to sell it or trade it in, particularly in a few years’ time when the switch-off has happened or is imminent.

Should you buy a car with Apple CarPlay and Android Auto? Read our guides to find out.