Only available as a three-door and with a pretty small boot, the Fiat 500 isn’t great if you regularly carry passengers

The Fiat 500 excels as a nippy city car. Its large windows and compact dimensions mean it’s very easy to place the 500 exactly where you want and parking is a doddle, especially if you choose the optional rear parking sensors.

The Fiat 500 is small, but still manages to pack space for four adults – although getting in and out can be tricky due to the Fiat 500s three-door layout. However, those doors open wide and the seats slide forward far enough to make it easy to get into the two back seats. There are only two seatbelts in the back, though, so carrying a fifth person isn’t even an option.

The other downside with the 500 is that there’s not much in the way of interior storage. The cabin has been designed to maximize passenger space and that comes at the expense of storage. There’s a tray instead of a glovebox ahead of the front passenger, shallow door bins and a small, lidded cubby under the dashboard-mounted gearlever, but that’s about it. 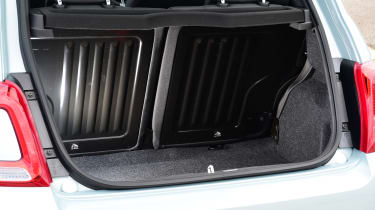 Despite the 500's compact exterior dimensions, the boot is quite impressive. It can take 185 litres in regular use, which is 26 litres less than the MINI hatchback, and down on the Hyundai i10 and Volkswagen up! with around 250 litres. The back seats fold to create a 550-litre boot, although that’s smaller than the MINI’s maximum (731 litres). If you want the rear seats to fold individually, that’ll cost you extra on the entry-level trim. Unfortunately, the 500’s styling means that the boot lip is fairly high, too, and the narrow opening means bulky items are difficult to load.