The Fiat 500 feels most at home in the city, with the TwinAir engine our pick of the range, but the MINI is more fun to drive 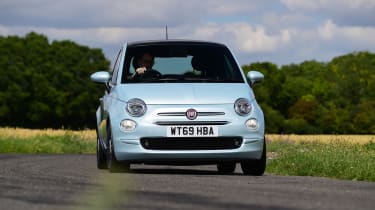 The Fiat 500 is designed to be a stylish city car and it really excels around town. Its compact dimensions and large front windows mean it’s easy to see where you’re going and place the car where you want it, and the 500 can nip through gaps that would leave other cars – even superminis – sat waiting.

One neat feature is Fiat’s City Steering mode, fitted to every new 500. You simply press a button on the dashboard to give the steering extra power assistance, which makes it easy to twirl around with hardly any effort. This makes parking a breeze and Fiat offers optional rear parking sensors (on the Pop model) to help with reversing, too. It’s worth noting that, thanks to the small rear windows and large C-pillars, that rearwards visibility isn’t nearly as good as the view out the front.

The suspension is a bit on the firm side, but it’s acceptable around town and only rough roads cause the car to disturb those inside. In corners, there’s plenty of grip from the relatively skinny tyres, however the 500 isn’t the most exciting city car to drive. It’s safe, easy and predictable, but the steering doesn’t have much feedback and there’s plenty of body lean in corners.

Unfortunately, the gearshift could be a bit better – it’s not as smooth that of a Mazda2 or MINI, and while it’s easy enough to find the right gear, selecting reverse can be a bit tricky. 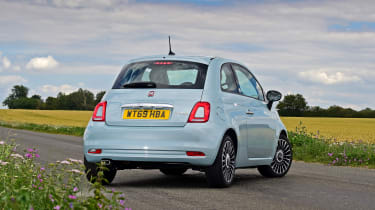 The 1.2-litre engine doesn't make the 500 especially fun to drive, and it's rather sluggish to accelerate from 0-62mph. It is cheap to buy, though, and in the real world should be cheap to run – despite the average looking official fuel-economy figures.

With 69bhp, the 1.0-litre petrol engine found in the Mild Hybrid gets the 500 from 0-62mph in 13.8 seconds. It needs plenty of revs, but feels a bit less strained than the 1.2-litre, even if it isn't especially refined. It's at its best in town, but can struggle on faster roads.