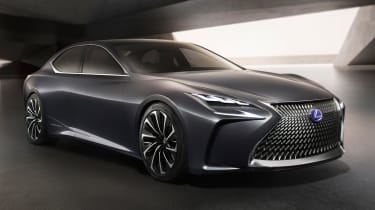 Lexus has unveiled a dramatic new concept car at the Tokyo Motor Show that offers a glimpse of the next-generation Lexus LS.

The Lexus LF-FC Concept is a luxury saloon that sports a striking redesign of the brand’s signature grille, a curvaceous side profile and thin, futuristic three-pronged rear lights.

Lexus says the car’s coupe profile hints at its sporty nature, asserting that the LF-FC concept is “designed for enjoyment on winding roads rather than straight motorway cruising”. 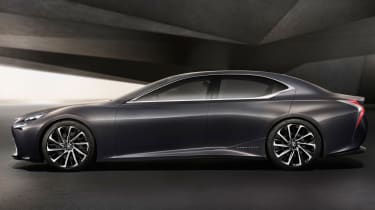 The styling of the concept car is significantly different to that of the current LS, which is now three years old. Lexus says the LF-FC showcases the “design and technology direction of the brand’s future flagship sedan”. With a new LS model due in the next few years, it seems likely elements of the concept will work their way on to the production version of the LS when it eventually arrives.

The LF-FC has a hydrogen fuel-cell electric powertrain that sends power to all four wheels. Lexus engineers were careful with the layout of the components, placing the fuel cell at the back, the power control unit at the front and the hydrogen fuel tanks in a T-shape to achieve the best weight distribution for sporty handling. 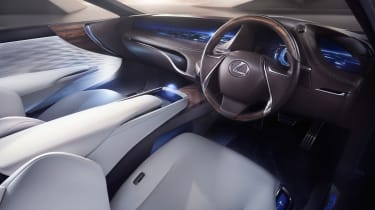 The advanced features don’t stop there, though – the interior features ‘touchless technology,’ which lets you operate the car’s infotainment and air-conditioning systems with hand gestures rather than panels or switches. The system also uses holographic projections.

The LF-FC is equipped with the latest generation of autonomous driving technology, which has “an elevated level of traffic environment recognition, prediction and judgment functions”.

Hydrogen-powered cars are still rare on UK roads, but that’s likely to change in coming years as the technology gets cheaper and the refueling infrastructure improves. The current LS range doesn’t include a hydrogen model, but it’s much more likely that we’ll see one in the next-generation line-up in a few years’ time.