The Renault Clio at 25 – a history of Renault's icon

We look back at 25 years of the Renault Clio, one of the UK’s all-time favourite small cars. 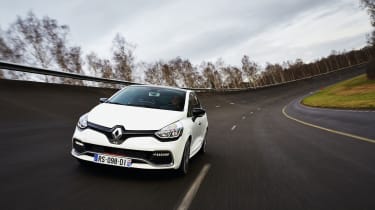 When the Renault Clio arrived to replace the popular Renault 5 in 1990, it was a new name in an expanding supermini market – compact and fun to drive yet spacious and advanced in its design. Today, the Renault Clio is in its fourth generation, a modern supermini, offering practicality and the latest technology in a nimble, engaging package. It sounds like little has changed, and yet so much has.

In 2016, the Renault Clio is 25 years old and one of the biggest names in a supermini segment that is itself the biggest in the UK car market. Over 1.2 million Clios have been sold in the UK over the last quarter of a century, and those models have recruited an army of motorists who’ve grown up with Clio as a car and a brand. Thousands of people have driven it, ridden in it and seen it evolve in its design, technology, efficiency and performance. You could say today’s Renault Clio has a rich history, but it’s still looking to the future.

The Renault Clio: where are we now?

The current fourth iteration Renault Clio builds on the qualities of the small Renaults that have gone before it. The vibrant, passionate character that’s been present in every Clio to date remains, despite the fact that this is the most sophisticated, spacious and technologically advanced small car Renault has ever built.

The curvy bodywork with its bold front end and powerful shoulder line produces a sporty look that stands out on the street. Yet under the Clio’s skin is an airy five-seat cabin with enough space for adults in the rear and a 300-litre boot.

The latest technology finds its way into every part of the new Clio’s make-up. In the engine bay, Renault’s innovative small-capacity turbocharged TCe petrol and dCi diesel engines deliver the kick of performance you expect from larger units with exemplary combined cycle efficiency of up to 88.3mpg with the dCi 90 Stop & Start option*.

All models get crucial safety features like front and side airbags, ESC (Electronic Stability Control) and Hill Start Assist, but there’s also a wealth of user-friendly technology designed to make living with the Clio a breeze.

Renault’s key card tech lets you enter and start the Clio without ever removing the card from your pocket, while the optional Media Nav and R-Link infotainment systems bring the latest mobile connectivity and navigation features to your car.

Trim levels run from the entry-level Expression, which dips the Clio’s starting price down to just £11,145^. Alternatively upgrade to Play, Dynamique Nav, Dynamique S Nav or the flagship GT Line Nav version. Beyond that, a huge array of personalisation options let buyers precisely tailor their Clio’s look and feel with bespoke colour schemes, styling accessories and yet more technology.

Step beyond the core Clio range and there are further options, including the well-equipped Iconic 25 Nav special edition that celebrates the Clio’s anniversary year and, of course, the formidable Renaultsport Clio 220 Trophy hot hatch. This Clio Renaultsport flagship model offers a 1.6-litre turbocharged engine, a super-fast paddleshift gearbox and offers 220bhp performance.

Its design and technology might be very much of the moment, but the new Renault Clio really has been 25 years in the making. Its reputation and place in the hearts of UK car buyers have been built on the shoulders of all the Clio models that have gone before. Here we explore some of the highlights from the iconic small car’s colourful history….

The original Renault Clio went on sale in the UK in 1991 after making its world debut the year before at the Paris Motor Show. 1991 turned out to be an auspicious year for Renault’s ground-breaking new supermini as the Clio also took the 1991 European Car of the Year title.

The first Clio laid down the model’s blueprint and, from its launch until the second-generation took over in 1998, the Clio’s place in the hearts and minds of UK car buyers was reinforced by the famous series of TV commercials starring ‘Papa and Nicole’. The eight adverts (one released every year of the first Clio’s lifespan) told the story of a young woman’s relationship with her father, putting the Clio centre stage and becoming hugely popular.

The Clio also fostered its relationship with the UK’s performance car fans almost from the beginning. The hot Clio RSi and 16V versions followed the mainstream models on to the market, but it was in 1994 that the motorsport engineers at Renault Sport gave the Clio its first true performance icon – the Renault Clio Williams.

Built in association with the Renault-powered Williams F1 Team, this was a little Renault Clio with a big 145bhp 2.0-litre engine. The now famous deep blue bodywork and gold alloy wheels made the Clio Williams unmistakable, and combined with its thrilling driving dynamics to establish the car alongside the greatest hot hatchbacks in history.

Only around 12,000 Renault Clio Williams models were built, but many were converted into race cars so road going versions are rare and highly sought-after. This is particularly true of the original ‘series one’ cars with their individual numbered plaques on the dash. 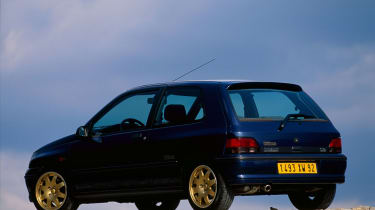 In its second-generation, the Renault Clio really found its feet. The cheeky nimbleness of the original remained, but the new 1998 incarnation was more mature in many respects. The Clio had grown into the role of small family car just as car buyers were demanding that their superminis do more.

Gently rounded extremities and a bold sloping roofline gave the Clio a cute, sporty look, which also hid the fact that it had grown in length (by 64mm) and width (by 14mm). There was more room inside where the design had taken on a similar curvy theme, and a higher-quality feel was evident throughout the car.

The Clio also began to use alternative materials in its second generation to save weight and costs. As is commonplace in cars of today, the front wings were plastic and aluminium was used for the bonnet in some versions.

In 2000, the car scored four stars for safety in the Euro NCAP crash tests, a class-leading effort at the time, and in 2001 the Clio got its first dCi diesel engine.

The common-rail direct fuel injection system the Renault dCi engines used was to help rid diesels of their noisy, smoky reputation by delivering smooth, powerful performance with great efficiency. The Clio was one of the small cars that helped blaze that trail and dCi engine technology remains a cornerstone of the Renault Clio range today.

The second-generation would also be the car to cement the Clio’s reputation as a base for great hot hatchbacks. This was the first Clio to officially carry the Renaultsport name when the Clio Renaultsport 172 arrived in 1998. This 170bhp hot hatch would evolve into the 180bhp Clio Renaultsport 182 after the Clio’s 2004 facelift. It became the first hot Clio to offer the ‘Cup chassis’ option of lower, stiffer suspension, but it still couldn’t claim to be the best performing second-generation Renault Clio.

That honour went to the Renault Clio V6, a car that enthusiasts still can’t quite believe Renault signed off for production, but will be eternally grateful that it did. 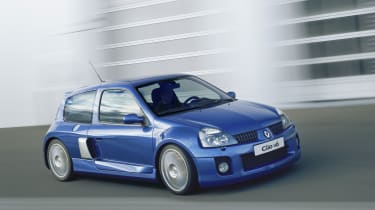 Although based on the second-generation Clio platform, the Clio V6 was thoroughly re-engineered with a new rear-wheel-drive, mid-engined layout and a 223bhp 3.0-litre V6 engine that was upgraded to 251bhp in 2003. To this day, it remains easily the craziest Clio ever sold, a testament to Renault creative thinking and ingenuity.

The second-generation car continued to be sold until 2009, badged as the Clio Campus, but the Renault Clio took another quantum leap forward in 2005 with the launch of the third-generation car at the Frankfurt Motor Show. Yet again it was bigger and more sophisticated. With an overall length 213mm up on the second-generation version that was closing in on the four-metre mark, it was one of the largest superminis yet seen.

The technology count also swelled with Renault’s key card set-up making an appearance for the first time, along with a quota of advanced safety equipment usually only seen on larger cars. This helped the Clio to an outstanding five-star Euro NCAP crash test rating and to another European Car of the Year crown in 2006.

Renault’s dCi diesel technology formed an integral part of the third-generation Clio range, but in 2007, the car gained Renault’s 1.2 TCe turbocharged petrol engine. This, once again, put Renault and the Clio ahead of the curve in the small car market where small-capacity turbo petrol engines were to become a defining trend over the coming years. 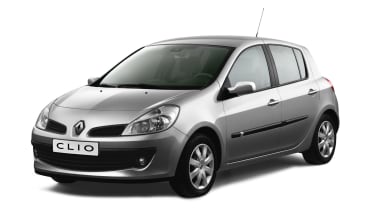 Prior to the third-generation, the Clio had only been offered in three and five-door hatchback guises in the UK, with the four-door saloon versions reserved for other markets. The range was about to grow, however, with the addition of the Renault Clio Sport Tourer estate that was previewed by the Clio Grand Tour concept at the 2007 Geneva Motor Show. With an extended wheelbase and a boot boosted to 431 litres, the production car brought useful extra practicality to the Clio line-up.

Renault Sport got its hands on the Clio yet again in third-generation guise with the Clio Renaultsport 197 hot hatch topping the range from mid 2006. While other performance hatchbacks at the time were turning to turbo power in line with mainstream superminis, Renault favoured a big, normally aspirated 194bhp 2.0-litre engine for this car and it was a hit.

The smooth, high-revving power delivery set the Clio apart from rivals and made it a popular car for track use, just like its hot Clio predecessors. The Renaultsport 197 was upgraded to the Renaultsport 200 in 2010 with more power and suspension tweaks.

The upgraded Renaultsport car also formed the basis for Renault’s revival of the Gordini brand, which had made its name in the 1960s and 70s as a performance tuner of Renault cars. The Clio Gordini 200 was a high-spec limited edition version of the Clio Renaultsport 200 with distinctive Gordini blue paintwork and white racing stripes over the bonnet and roof.

Renault Clio Fourth-Generation: a new direction for the Clio

Towards the end of the third-generation Renault Clio’s reign, Renault began dropping tantalising hints as to what the public could expect from the fourth-generation car.

The Renault DeZir concept car was the star of the 2010 Paris Motor Show, but this striking sports coupe with its Kevlar bodywork and scissor doors was more than just Renault’s designers flexing their creative muscles. The DeZir laid the foundations for a new Renault design direction that the fourth-generation Clio would soon move from the motor show stand to UK roads. 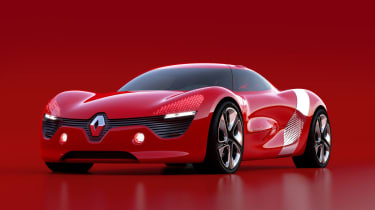 25 years of the Clio

So that’s 25 years of the Renault Clio, and it’s safe to say that UK motorists and Renault’s small car have been through a lot together. The Clio has helped shape the small car market in this country with its numerous design and technology innovations, but also with its essential emotional appeal. A lot of people love the Renault Clio and that’s about as strong an endorsement of a supermini as you’ll get.

*Official Fuel consumption figures are produced for comparison purpose and are measured according to the European Directive 80/1268/EEC. These figures are specific for a vehicle type and not for a single car. Real world fuel (actual) consumption can vary as the fuel efficiency of a vehicle is influenced by driving behaviour, weather and road conditions. The use of technical equipment for example air conditioning, can also effect the fuel consumption. For further information, please visit the Vehicle Certification Agency web site www.vca.gov.uk.