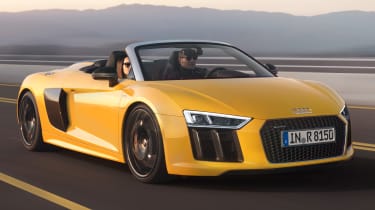 Orders have opened for the Audi R8 Spyder convertible supercar following the car’s launch at March’s Geneva Motor Show and the car’s UK public debut at the Goodwood Festival of Speed in June. It’s powered by the same 533bhp 5.2-litre naturally-aspirated V10 petrol engine as the Coupe and is priced from£129,990 – just over £10,000 more than the Coupe. First UK deliveries will begin in late 2016.

Not much has changed style-wise compared to the Coupe, apart from the obvious lack of roof. You get the same huge front grille, with wide air-intakes either side. These are slatted to ensure that the cooling air – for both the brakes and the engine – is directed to where it needs to be. The contrasting-colour air-intakes just behind the doors that have become something of an R8 signature also make an appearance. 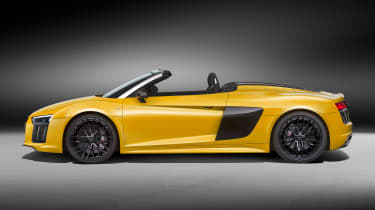 You get the same slender headlights with the bold LED daytime running light graphics within the headlight clusters signature sharp headlights and gills in the front brake ducts are all identical to the coupe. Meanwhile, the biggest change comes in the shape of the flat deck behind the cabin, rather than the sloping glass screen over the engine. This is covered in slats and gaps to help hot air escape the engine bay, although unlike the Coupe, you can’t see the engine through the engine cover.

Hiding under that opaque engine cover is the same 533bhp 5.2-litre petrol V10 that’s found in the Coupe. Its ends its power to all four wheels via a standard seven-speed dual-clutch automatic gearbox. All these factors combined means it’ll do 0-62mph in 3.6 seconds, and will top out at 197mph. 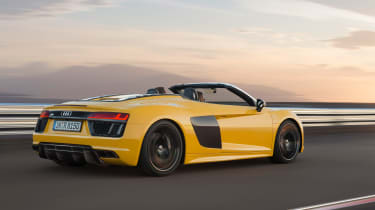 Official fuel-consumption figures state that the R8 Spyder will return around 24mpg, while the car’s CO2 emissions of 277g/km put it in the top road tax bracket, meaning a £505 annual bill. If you can afford the £130,000-odd price tag, however, you probably don’t worry too much about such things.

Apart from a significant increase in headroom (with the roof down, anyway) the Spyder’s interior is identical to the coupe’s. Leather-upholstered sports seats come as standard, as does Audi’s excellent Virtual Cockpit digital instrument screen. You also get the MMI Navigation Plus infotainment system as standard, which, unsurprisingly, comes with sat nav, as well as Bluetooth phone connectivity and access to the internet.

You’ll also be able to specify a wireless inductive phone charging bay, while the R8 Spyder is the first Audi to get the company’s smartphone interface, which allows certain features of your smartphone to be displayed on – and controlled from – the Virtual Cockpit screen. You also get a 13-speaker Bang & Olufsen stereo, which includes two speakers next to the headrests. 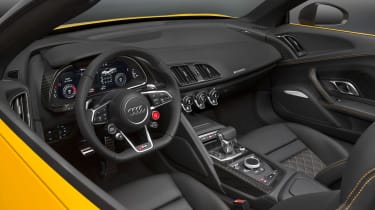 There’s also plenty of scope for personalising the R8 Spyder, with 11 different colours to choose from and the ability to add various bits and bobs to the exterior. You can also choose to personalise the black ‘sideblades’ if you wish, as well as Audi’s famous Laser LED headlights. Also on the options list is the Sport Plus Pack, which adds the adaptive magnetic ride suspension and variable speed steering. This also adds a louder sports exhaust that has tips finished in black, rather than chrome.

You can place your order for the new Audi R8 Spyder now, with prices starting at £129,900. First deliveries of the new car are expected to start in the UK towards the end of this year.