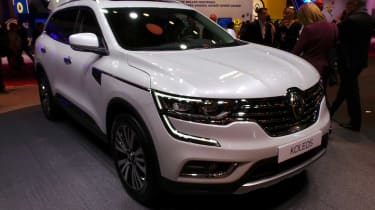 Renault has announced pricing for its new Koleos SUV, and the company’s alternative to the Hyundai Santa Fe clearly has aspirations, as it’s around £5,000 more expensive than the Nissan X-Trail – a car with which it shares many fundamental mechanicals.

So what do you get for your money? Well, a large SUV with plenty of presence, equipment and space. The Koleos is certainly an imposing vehicle, while it’s only being offered in two high-spec trim levels and Renault claims class-leading rear kneeroom.

With show cars having been displayed in a range-topping ‘Initiale Paris’ trim level, the Koleos marks a clear move upmarket for Renault. Specification is high, with 19-inch alloy wheels, heated and ventilated Napa leather seats and a 13-speaker Bose stereo all available.

Renault has earned a good reputation for safety over the years and the Koleos is set to benefit from the French carmaker’s latest developments in this area. Autonomous emergency braking will available, as will a system that can detect driver fatigue. Also offered will be road-sign recognition, lane departure warning and automatic high-beam headlights.

As final UK specification hasn’t been confirmed, it’s not yet clear how much of this equipment will be fitted as standard. However, we do know that even the entry-level model will feature the 8.7-inch touchscreen infotainment system from the Renault Megane hatchback.

While the flagship ‘Initiale Paris’ model is very lavishly equipped, it’s likely to have certain exclusive features not available even as an option on lower-spec cars. However, this being a fiercely competitive area of the market, we expect even mid-range cars to be well equipped. 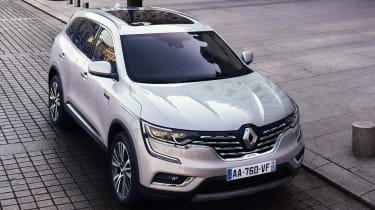 While it’s an all-new model, the Koleos is undoubtedly a Renault, with design cues like C-shaped LED daytime running lights, a large front badge and a distinctive grille giving it a ‘family’ face. Its boot has adopted the very wide rear lights of the Renault Megane, along with exhaust pipes that appear integrated into the rear bumper.

A significant 213mm of ground clearance helps make the Koleos significantly taller than any other model in Renault’s range and the French manufacturer claims the new car will have real off-road capability – it seems like those windscreen pillar grab handles were put there for good reason.

With many buyers choosing an SUV more for practicality than go-anywhere ability, Renault also intends its new SUV to have best-in-class rear legroom, with around 30cm of kneeroom for passengers sat in the back. 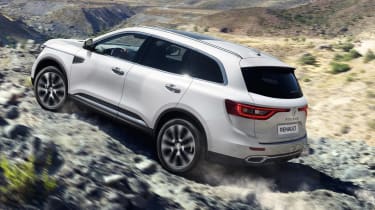 Both of the Koleos’ engines run on diesel and the 1.6-litre is paired with a two-wheel-drive setup and produces 128bhp, while the 2.0-litre gets 4x4 as standard and musters 175bhp. An automatic gearbox is available if you choose the more powerful of these engines, but note it’s an ‘X-Tronic’ transmission – Renault’s name for a CVT gearbox. Economy officially ranges from 47-57mpg depending on how the Koleos is configured, with the 2.0-litre automatic 4x4 model being the thirstiest and the 1.6-litre front-wheel-drive manual the most frugal.

The Nissan X-Trail is available with seven seats and has a distinct price advantage, whereas the Koleos is focused more on luxury than utility and is only available in two high-spec guises.

The Koleos is on sale now, priced from £27,500. First deliveries will take place in the summer. 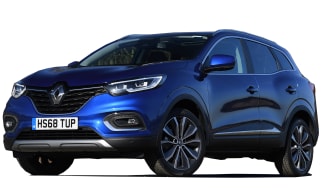