The Renault Koleos SUV has arrived to quench the demands of customers looking for something bigger than the popular Renault Kadjar. The Koleos is a direct rival to the Skoda Kodiaq and also has a tough job on its hands, with other talented rivals like the Kia Sorento, Ford Edge, Hyundai Santa Fe and Nissan X-Trail all vying for your attention.

Comparisons with the X-Trail are of particular interest, because (and the sharp-eyed may already have noticed a similarity) the Koleos is based on the Nissan, just like the Kadjar is based on the Qashqai. Don’t worry, though – unlike some lazy rebadging exercises of years gone by, this is a thorough reworking.

Unique styling, specifications and trim ensure there’s plenty to choose between the Nissan and Renault, and a large interior and 565-litre boot help separate the Koleos from the Kadjar in Renault showrooms. Curiously, however, Renault has been so keen to concentrate on extra passenger space and range-topping comfort that no seven-seat option is available, which seems an odd move given rivals like the Kodiaq, Sorento and Santa Fe offer them. Sales staff will point you in the direction of the Renault Grand Scenic MPV instead, but in a market shifting towards SUVs, this seems like a missed opportunity. 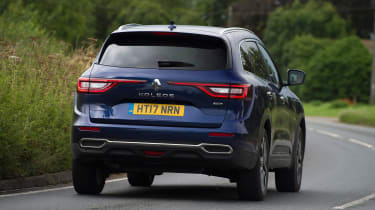 There are four versions of Koleos to choose from, if you consider the diesel engine and the choice between front or four-wheel drive and two trim levels. As part of a reshuffle to simplify the range, the automatic X-Tronic gearbox was made standard in October 2018, with the manual no longer available. The smaller 1.6-litre dCi engine with 129bhp was also discontinued.

With 175bhp, the 2.0-litre diesel is quite a bit more powerful and comes with front or four-wheel drive. Fuel economy is 44.1-45.6mpg, while the Koleos emits 163g/km (front-wheel drive) or 168g/km (four-wheel drive) of CO2. Performance isn’t class-leading, but 0-62mph in around 10 seconds isn't too bad for a large SUV. The CVT automatic is also one of the best we’ve tested, keeping progress smooth and unflustered. 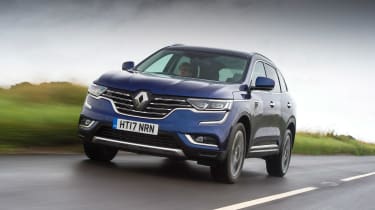 Hefty and direct steering adds to your confidence and the Koleos’ suspension offers a good compromise between neat handling and comfort on faster roads. The bodywork stays fairly level, unless provoked by carrying lots of speed into a tight corner, and most imperfections in the road are dealt with. It’s quiet, too, with only a bit of a tyre noise interrupting the calm inside. It’s not quite as impressive at lower speeds, with more bumps jolting the cabin around town.

Sitting at the top of Renault’s range, the Koleos is well kitted out from the off, with the Iconic trim getting part-leather upholstery, climate control, a seven-inch touchscreen infotainment system and 19-inch alloy wheels. There are only two trim levels and the GT Line model switches to a portrait infotainment display measuring 8.7 inches, as well as adding full leather upholstery, LED headlights, a panoramic sunroof and a powered tailgate.

The Koleos received a five-star rating when tested by independent crash safety experts Euro NCAP – it offered strong impact protection for adults and children alike and was rated well for its driver assistance technology. Autonomous emergency braking is standard, as is a blind-spot warning system and traffic-sign recognition with over-speed prevention.

Although its reliability has yet to be proven, with loads of interior space, a long list of standard equipment and enjoyable driving manners, the Koleos is an appealing choice of family SUV. 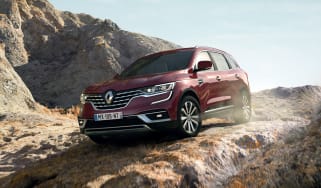