No seven-seat option, but the Renault Koleos is spacious and has a decent boot

Renault has decided to make the Koleos a spacious, comfortable and relatively luxurious five-seat SUV; seven seats aren’t available, even as an option. Instead, Renault believes its seven-seat Grand Scenic MPV is a better bet if you have a large family. However, we see this as a rather odd decision when customers are deserting the MPV market in favour of SUVs. Not only that, but rivals including the Kodiaq all offer seven seats.

The number of seats aside, there’s no denying the Koleos has a spacious and comfortable interior, with rear kneeroom among the class leaders and plenty of headroom in the front and back seats, even for tall adults.

It’s light and airy for passengers, and those sat in the back are treated to great views thanks to the standard panoramic sunroof. The raised seating position is sure to satisfy drivers who enjoy the elevated visibility SUVs offer, too. 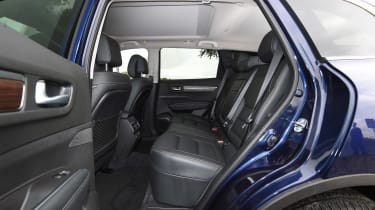 There are plenty of storage areas dotted around the cabin and four USB ports for passengers to charge their portable devices. Door bins are deep and well shaped to take a large bottle, while the front cup-holders offer the novel feature of being able to keep your drink warm or cool.

The boot is accessed by a large hatchback, which is powered in the top trim, and offers 565 litres of luggage space behind the rear seats. Folding down the back seats should be easy, with a button in the boot allowing you to drop them individually or all at once. In another neat touch, the powered boot can be opened by waving your foot under the back bumper, so long as you have the keycard on you. 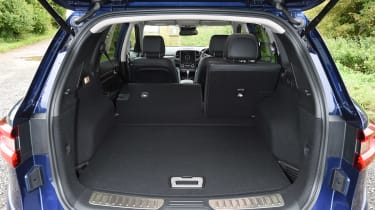 Maximum load space increases to 1,795 litres with the seats stowed, which will be easily large enough for most families, but the Koleos can’t match the Kodiaq’s seats-up and seats-down figures of 720 litres and 2,005 litres if you need the most space possible.

It’s highly likely prospective Koleos owners will be looking to tow a caravan, horsebox, boat or trailer and its maximum braked trailer limit of 2,000kg is likely to suffice in most cases. Top versions of the Santa Fe, Sorento and Kodiaq are better, however, being able to tow up to 2,500kg.