An SUV this big won’t set economy records, but the Renault Koleos should be affordable to run

Given the size of the Renault Koleos, it’s never going to be as cheap to run as a smaller SUV or a crossover, but its figures are reasonable for the class. The Nissan X-Trail can achieve greater economy, because it’s available with smaller engines and less kit than the Koleos in more basic trim levels.

The most economical engine in the range was the 1.6-litre dCi diesel shared with the X-Trail, but this was discontinued in October 2018.

It means the Koleos is available exclusively with the 2.0-litre diesel capable of 45.6mpg with front-wheel drive and 44.1mpg with four-wheel drive. The Koleos comes with the Renault's X-Tronic CVT automatic gearbox as standard, and CO2 emissions of 163g/km and 168g/km correspond to the highest 37% BiK band, making the Koleos more expensive to run than some rivals. 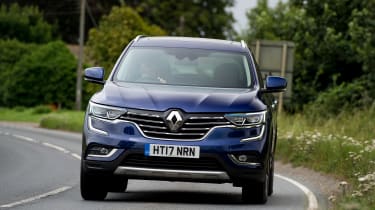 After the first year's CO2-based road tax (generally included in the on-the-road price), every version of the Renault Koleos will cost £140 a year to tax. Those with a list price (including options) of more than £40,000 are liable for an additional surcharge of £310 a year in years two to six, bringing the annual bill to £450 during that period, but you'll have to tick almost every option to break the threshold.

Insurance groups are very straightforward, with the 2.0-litre sitting in group 22 in Iconic trim or group 23 in GT Line grade. Most versions of the Kodiaq sit in groups 17 to 22, while the Santa Fe and Sorento are likely to be more expensive with group 27 insurance.

Renault’s five-year/100,000-mile cover puts the Koleos ahead of the X-Trail, with Nissan dishing out a three-year/60,000 warranty – the same as Skoda offers with the Kodiaq. The Kia Sorento has the longest cover, lasting for seven years and transferable between owners.

The Koleos will need to visit a dealership once a year or every 18,000 miles, which should suit high-mileage drivers nicely. An EasyLife servicing plan costs £300 for three years of maintenance with roadside assistance also included for the same period.